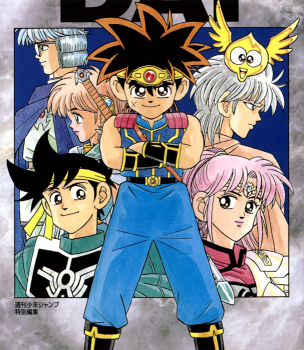 Aban and his disciples

Dai's Big Adventure, more or less. A Shounen manga (and later anime) series, spun off the wildly popular Dragon Quest RPG series, with a scenario by Sanjo Riku and art by Koji Inada. The titular hero, Dai, is a young kid who's been raised by monsters on Delmarine Island after he was washed ashore as an infant, the only survivor of a shipwreck, and who dreams of being an adventure hero. Since the Demon King had been defeated many years before, the monsters have been freed from his influence and are actually quite peaceful — but suddenly, one day, the Demon King comes back to life, and the monsters start raging again.

Just then, a "hero trainer" named Aban who is later revealed as the hero who had slain the Demon King lands on the island with his wizard trainee, Pop, and sets up a magical barrier, which frees the monsters from Evil's influence. He then proceeds to train Dai to be the next Great Hero, but before they can complete the training the Demon King himself shows up, Aban sacrifices himself and fails... but Dai flies into an Unstoppable Rage, and chases the Demon King away.

After the battle, he and Pop decide to fight the Demon King, to rid the world of evil once again.

Not to be confused with the Konami 3D Fighting Game Lightning Legend Daigo no Daibouken.

Tropes used in Dai no Daibouken include:
Retrieved from "https://allthetropes.org/w/index.php?title=Dai_no_Daibouken&oldid=1488906"
Categories: