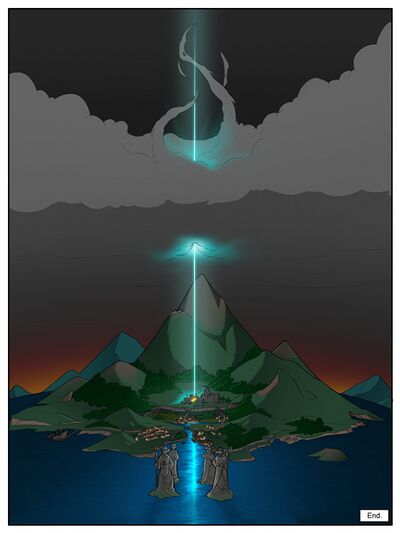 Turns out that concentrated magic is very explosive.

When an event of great celestial, magical or ultratech power occurs, it is often heralded by a beam of light—usually blue or white—that shoots straight up into the sky from ground zero, often evaporating whatever clouds are unfortunate enough to be in its path. Sometimes it starts out narrow and expands in diameter as it climbs.

In the case of more disastrous events, the Pillar of Light is just an extension of the Pre-Explosion Glow; in other cases, it can be part of a truly cosmic Battle Aura. The rest of the time it is relatively benign, if exciting to watch.

It should be noted that a Pillar of Light usually travels upwards. A Pillar of Light that comes down, more often than not, is a Kill Sat, which tends to be far less benign. See also Sphere of Destruction for the globular variant.

Examples of Pillar of Light include:

Retrieved from "https://allthetropes.org/w/index.php?title=Pillar_of_Light&oldid=1947067"
Categories:
Cookies help us deliver our services. By using our services, you agree to our use of cookies.