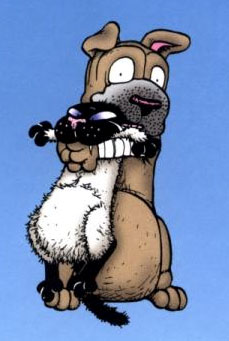 Get Fuzzy is a newspaper comic written and drawn by Darby Conley, that ran from September 1999 to November 2013 with occasional Sunday strips appearing until February 2019. It chronicled the day to day (mis)adventures of a Siamese cat named Bucky, a Labrador-Shar Pei cross named Satchel and their owner/roommate, Rob Wilco.

The three live in an apartment in Boston, where Satchel has his own room, while Bucky takes a towel closet (he has not only complained about it, but seceded from the United States). Many of the jokes revolve around the mean-natured Bucky taking advantage of Satchel's naïveté, driving Rob crazy, and incredibly lame puns.

Tropes used in Get Fuzzy include: