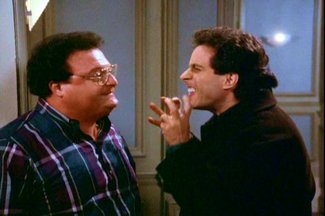 The Sitcom Arch Nemesis is a very different creature from the dramatic or action-show Arch Enemy. He usually isn't dangerous or evil, for the most part he's just very annoying—sometimes he's actually a very nice guy. However benign or friendly he is, he just rubs a character from the show (usually the lead) entirely the wrong way, and the two will never miss an opportunity to have at each other. Often the character and his nemesis are kindred spirits and don't even realize it; these rivals are much more likely to have an Enemy Mine plot than dramatic rivals.

This character is almost never one of the main cast. Exceptions to that rule include Mimi, Drew's nemesis from The Drew Carey Show, who is pretty much the second main character of the series; and Marcy from Married... with Children, who started out as just an ultra-nice neighbour but wound up as Al's cackling nemesis. An all-purpose jerk along the lines of Frank Burns from M*A*S*H doesn't count, since he's hated by everyone equally.

Examples of Sitcom Arch Nemesis include: