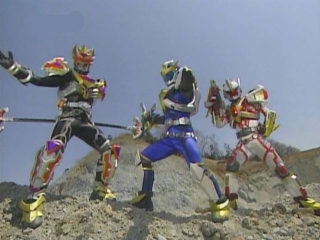 A Toku show that aired in 2006. Kenji Narukami comes to the small town of Akebono, where the city's Power Spot is of great interest to the demonic Jamanga. Dr. Worm and an assortment of others send down monsters that defy description in an attempt to gather "Minus Energy" - the negative feelings from people- to revive the Big Bad.

Enter the Madan Warriors. Their Empathic Weapons of Choice, Gekiryuken and Gouryugun, along with a collection of magical keys, are the only things that can set things right. Along the way, newcomer Koichi Shiranami joins in, the villains start to turn on each other, and the series' 52-episode run comes to a fulfilling conclusion.

Available via bittorrent and KRDL.info, since it's not likely to ever come to the US.

Despite constant rumours of a sequel (though it had extremely low television ratings compared to Super Sentai and Kamen Rider, it amazingly sold far more toys) it never came to be. It later got a Spiritual Successor in Tomica Hero Rescue Force.

Tropes used in Madan Senki Ryukendo include:
Retrieved from "https://allthetropes.org/w/index.php?title=Madan_Senki_Ryukendo&oldid=1586184"
Categories:
Cookies help us deliver our services. By using our services, you agree to our use of cookies.