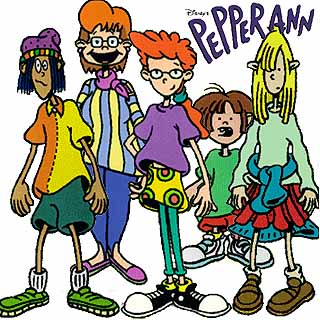 Pepper Ann is a 1990s Disney-created Saturday Morning Cartoon that ran on ABC's One Saturday Morning from 1997-2001. It centers on Pepper Ann, a 12-year-old girl and her other classmates. Her parents are divorced; she lives with her mother and younger sister "Moose." With her two best friends, Nicky and Milo, she goes through a reasonably plausible series of junior high adventures. The series was inspired by short multi-paneled comic strips about Pepper Ann, which appeared intermittently in magazines geared at tween girls.

Tropes used in Pepper Ann include:
Retrieved from "https://allthetropes.org/w/index.php?title=Pepper_Ann&oldid=1763537"
Categories: