Everything About Fiction You Never Wanted to Know.
< Super Robot Wars Compact 3
Jump to navigation Jump to search 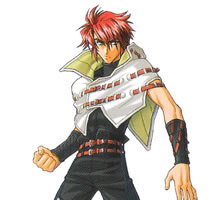 "Oh, hello there, Kenshiro! Since when did you dye your hair red?"

Protagonist of Super Robot Wars Compact 3, who gets his limelight in Super Robot Wars Original Generation Gaiden. He's a member of the fight-happy Shura, though due to his refusal to their ideals of constant fighting, he eventually defects. He's also a practitioner of the fighting style Kishin Ken, which is really Hokuto Shinken IN.GIANT.ROBOTS!. Do note since he's too much into the culture of the Shura since he was child, he can go a bit..."backwater, country boy" in front of human cultures.

His story in Compact 3 begins with him being pitted with his brother Fernando Albark in a holy deathmatch about who gets to be a Shura general. On top of beating Fernando, Folka's doubts reaches its peak and leaves the Shura, leaving his brother extremely bitter. Folka goes off to join the Londo Bell and proceeds to search for a new lifestyle of the Shura. He faces lots of his brethrens and is forced to kill them, ultimately defeating Shura King Alkaid Naash and is anointed the new King. Folka leads his remaining people with the new lifestyle of Shura.

In Original Generation Gaiden, this story gets a bit of a revamp: there's no holy deathmatch. Instead, he finds a rivalry with Ordinary High School Student Kouta Azuma, after he dons the Roar Armor, becoming the Henshin Hero "Fighter Roar". Folka kidnaps Kouta's younger sister Shouko per a deal with Duminuss to goad Kouta into fighting him. Ironically, Folka didn't expect to be persuaded by Shouko to stop the rivalry, leading him to develop a relationship, fall in love and make a decision to protect her, ultimately becoming the reason why he defects. The rest of the story goes pretty much the same as Compact 3, except he gets his Mid-Season Upgrade in the middle of battle as opposed to in the middle of a intermission dialogue. That, and not all his brethrens (including Fernando) end up dead.

Folka's mecha is the Shura God Ialdabaoth, which transforms into the godly Apotheosized Ialdabaoth. They embody these tropes:

A race of fight-happy people, the antagonists of Compact 3. They ride the Shura Gods, which drain their lifespan in compensation of immense power. Their world is dying, so they travel through dimensions and find a place to settle and conquer, spreading their culture of fighting. Their greatest champions are called "Shura Generals". Some of the characters here also practice the fighting style Kishin Ken.

The Shura King, Alkaid led his people across dimensions trying to find a new land to inhabitate and spread his culture of Blood Knight. He picked Earth as a headstart, but had to lay low since his power was diminishing after the dimensional jump. He later emerges after the death of Mizal Touval, and tries to eliminate the traitor Folka, clinging to the old ways of life. With his defeat, Alkaid commends Folka's strength and elevates him into the new Shura King, requesting he lead his people according to Folka's new way of life: a life without fighting.

In Original Generation Gaiden, Alkaid's role remains the same, except rather than unknown places, he sets his headquarters in the abandoned Swordian Fortress, and due to the Shura's mostly backwater technology, he applies help from Duminuss to teach him how the fortress works. However, Alkaid's notably killed before Mizal, but still promotes Folka to king.

Alkaid uses the Shura God Extim and uses the fighting style Haoh Ken. When he's down to his last moments, he regenerates and evolves it into the Raha Extim. Tropes associated with Alkaid:

Folka's sworn younger brother. In Compact 3, he competes with Folka in a "holy deathmatch" to see who gets to be the next Shura General. Folka wins, but refuses to deal the finishing blow, leaving Fernando humiliated, swearing to kill Folka for it. Most of the time, he gets his ass kicked, so he turns to Mizal to enhance his power, which makes him into an uncontrollable berserker fueled with rage out for Folka's blood. Unfortunately, Mizal didn't take into account that by causing Folka and Fernando's older brother Altis Tarl to die, Fernando's rage turns against Mizal. He's then cured by Maysis Mark, joins Folka in killing Mizal, then puts a defiant stand against Alkaid, only to get himself killed.

Fernando in Original Generation Gaiden is pretty much the same, except there's no "holy deathmatch" and he's simply pissed at Folka because he betrayed the Shura for the sake of a woman. Fortunately, he avoids his intended Compact 3 death and allies with Folka and to defeat Alkaid, and later Dark Brain.

Fernando rides the Shura God Valefor, which is practically a blue/purple Palette Swap of Ialdabaoth, thus also practices Kishin Ken. It's eventually apotheosized, but in Original Generation Gaiden, the Mid-Season Upgrade only appears in the Valefor's strongest attack. Tropes associated with Fernando:

The self-styled "Freedom Knight", Alion's not a Shura General, but he's definitely strong enough to lead several Shura troops and get a unique Shura God. He's heavily under-characterized in Compact 3, and dies a generic, ruthless Elite Mook, with a bit of laid-backness. In Original Generation Gaiden, however, he somewhat becomes an Ascended Extra, with an upgrade in personality to Chivalrous Pervert who hits on his own mecha for jokes. He's also one of the people who ends up pulling a Heel Face Turn and joins Folka.

AKA Altis of the Flash. The eldest of the sworn brothers (consisting of him, Folka and Fernando), he's the top Shura General Alkaid has to offer. Despite that, this man upholds Honor Before Reason and prefers a fair fight. He's later pitted in a match to the death with Folka, which ends up in him dead, but turns out to be a Xanatos Gambit for Altis to buy time so Maysis can find a cure for the Brainwashed and Crazy Fernando. Winning would have been good too but just delaying was the goal.

In Original Generation Gaiden, he occupies the same role, but rather than a Xanatos Gambit, he pulls a Heroic Sacrifice for Folka, protecting him from a fatal attack by the homunculus Tis (who turns out to be Arco Katworl in disguise).

AKA Maysis of the Ice Spear. She's the only female Shura General and accompanies Altis most of the time. In fact, she's in love with him, but projects an aloof face to others. Along with Altis she wants to cure Fernando and eventually joins Folka in killing Mizal since he orchestrated Altis' death. Shortly after, she makes a defiant stand against Alkaid and got herself killed. At least she and Altis will be Together in Death.

In Original Generation Gaiden, Maysis pretty much has the same role, except since there's no Xanatos Gambit, she confronted Folka right after Altis died. But then, news comes in that everything was orchestrated by Mizal, and then Alion told her to lay low since she's too heavily wounded. Maysis spends the rest of the story in the sidelines, but still accompanies Folka when he had to leave with the whole Shura race.

AKA Mizal of the Severe Earthquake. The adviser to the Shura King, but is so blatantly treacherous he plans to harness enough power to overthrow Alkaid and usurp the throne. His underlings include Magnaz Ald and Arco. He contacts various factions and manipulates them to further his goal, including goading Fernando to get Brainwashed and Crazy. His plan comes to a halt when he orchestrates Altis' death, which had his brainwashing on Fernando spectacularly backfire, and is confronted by the Londo Bell, Folka, Fernando and Maysis, which gets him killed.

In Original Generation Gaiden, his only contact is fellow Smug Snake Duminuss , under the pretense of "teaching the Shura how to use the Swordian Fortress". Since Alkaid was defeated, Mizal takes the chance to challenge Folka for the position of Shura King; naturally, he gets himself killed in this continuity, too.

AKA Magnaz of the Heavy Quake. A Gonk Shura General with GIANT lips and... pretty much personifies the trope Dumb Muscle. Mostly serves as Mizal's ally pawn, which Folka points and lampshades out before he dies. In Original Generation Gaiden, he gets an Ascended Extra bit for harassing Early-Bird Cameo Touma Kanou during the early stages of the Shura invasion...then the Earth Federation Army comes to bust his ass, and things start snowballing down for Magnaz, like usual. Notably, while he tries to sucker punch Sanger by disabling his BFS, the resident Badass reveals why he's not left-handed, even though his primary weapon's knocked away.

AKA Arco of the Transformation. A saner version of Mizal's allies pawns, who specializes in shape-shifting. He's killed off earlier, around the same time as Alion, while impersonating Fernando. In Original Generation Gaiden, he becomes a slight Ascended Extra by impersonating Tis instead and deals the fatal blow to Altis, to which he would've done the same to Maysis, but Alion intervenes. He joins Mizal during his last stand following Alkaid's defeat. Arco's also responsible for kidnapping Kouta's sister Shouko.

Since Arco's not a Shura General, he has no Shura God to command, nor any specific mecha to use. Instead, he pilots the machine of whoever he's impersonating (though the capabilities of his machine-impersonating vary: in Compact 3, he could copy Fernando's Valefor (though still of lesser power); in Original Generation Gaiden, he couldn't copy Tis' Durgatel, thus sticks with a Mironga). Tropes associated with Arco:

Tropes regarding of the rest of the Shura:

Back to Super Robot Wars Compact 3

Retrieved from "https://allthetropes.org/w/index.php?title=Super_Robot_Wars_Compact_3/Characters&oldid=1824195"
Categories:
Hidden category:
Cookies help us deliver our services. By using our services, you agree to our use of cookies.