By the Lights of Their Eyes 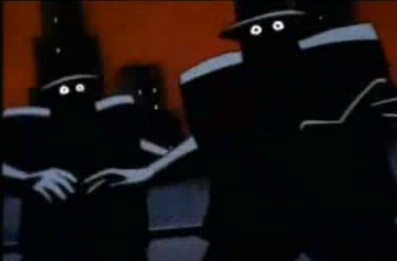 Whenever it is pitch dark, characters' open eyes are always visible.

The same applies, eventually, to any great big teeth which something lurking in the darkness may possess. A common shot is to have a nervous character scared in the dark as a variety of seemingly glowing teeth gather around them.

In live action, it is usually used to spooky effect.

By the Lights of Their Eyes seems like it should always go with Glowing Eyes, but it really doesn't.

This is generally a form of Hollywood Darkness, and may immediately precede a Nuclear Candle as part of The Reveal.

Not to be confused with See the Whites of Their Eyes, which is a figurative expression for getting close to your enemy. Nor Eye Lights Out, which is a death trope.

Examples of By the Lights of Their Eyes include:

Retrieved from "https://allthetropes.org/w/index.php?title=By_the_Lights_of_Their_Eyes&oldid=1844883"
Categories:
Cookies help us deliver our services. By using our services, you agree to our use of cookies.