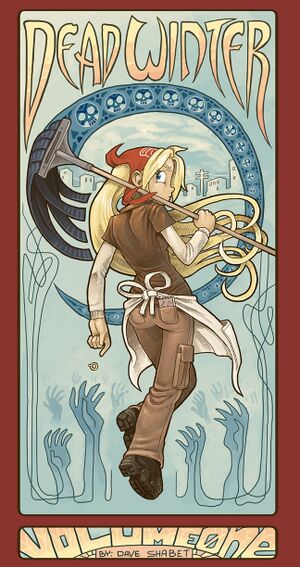 Dead Winter is a (mostly lighthearted) webcomic chronicling the Zombie Apocalypse from two points of view: Lizzie, an English major college student working as a waitress, and Badass hitman Black Monday Blues. Monday becomes involved in a vendetta against his former employer, while Lizzie simply tries to survive; eventually the two story arcs merge. Other members of the cast include the optimistic medic Alice, Lou the fat Italian plumber, and Lizzie's Jerkass of a former employer Frank. Secondary plots (mostly in the chapter epilogues) include Lizzie's fiance Trevor, and her cat Cuddles.

You can find it here.

Tropes used in Dead Winter include:

My every bone is thankful this yearlong day has mercifully come to an end.