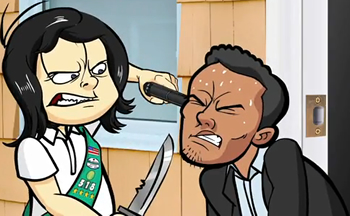 "Y'know, this is gonna sound funny, but you're not the first Girl Scout I've seen possessed by the Devil."
—Whose Line Is It Anyway?

Is there anything more adorable and innocent than a Girl Scout? Definitely yes, if you ask some people (especially in the Web Comic community). For some reason, they often end up depicted as vile monsters who use deceptive cuteness and innocence to guilt-trip adults into buying a product they neither want nor need (viz., Girl Scout cookies) at greatly inflated prices. And if that doesn't work, they've got other weapons they can resort to...

Evil Girl Scouts are a type of Killer Rabbit. They may not actually be called Girl Scouts. Expect them to kick shins. Sibling trope to Milkman Conspiracy.

Examples of Girl Scouts Are Evil include:

Lapinyuu: Would you like some fresh-baked cookies from Aunt Makoto?s Farm? They come in the flavors of chocolate, strawberry, peach, blueberry, pineapple, passionfruit and Oreos with peanut-- (Chloe slams door on her face) --butter.

"He acted this way when I wanted to be a Girl Scout."
"It's a paramilitary organization with cookies!"

Chef's dad: There was a knock on the door. I open it, and there's this cute little girl scout.
Chef's mom: Oh she was so adorable with her little pigtails and all!
Chef's dad: And she said to me "how would you like to buy some cookies?" and I said "well, what kind do you have?" and she had cinnamon, graham crunchy seeds, raisin oatmeal, and I said "we'll take a graham crunchy, how much will that be?" and she looked at me and she says "I need about tree-fiddy." Well, it was about that time that I noticed this girl scout was about eight stories tall and was a crustacean from the paleozoic era!