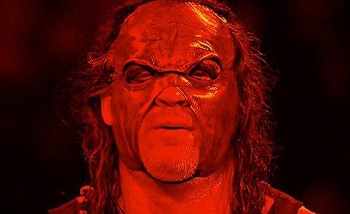 Kane is one of WWE's longest-tenured superstars, with the gimmick having debuted in 1997 (and the man behind the gimmick, Glenn Jacobs, having worked for WWE a number of times prior to the Kane gimmick); in Kayfabe, Kane is the half-brother of The Undertaker, with Kane's father being Undertaker's (former) manager Paul Bearer (the "Brothers of Destruction" shared the same mother). He was originally thought to be dead by Undertaker, in a fire that claimed the lives of their parents, before Paul Bearer brought him back. Since their initial feud, Kane and Undertaker have both teamed up and feuded again several times. Kane originally wrestled in a mask, but removed it in 2003 (revealing his supposed physical scars from the fire were more like mental ones). As of late 2011, the mask is back on.

Kane (wrestling) provides examples of the following tropes:
Retrieved from "https://allthetropes.org/w/index.php?title=Kane_(wrestling)&oldid=1927271"
Categories:
Cookies help us deliver our services. By using our services, you agree to our use of cookies.