Everything About Fiction You Never Wanted to Know.
Jump to navigation Jump to search
/wiki/Edgecreator 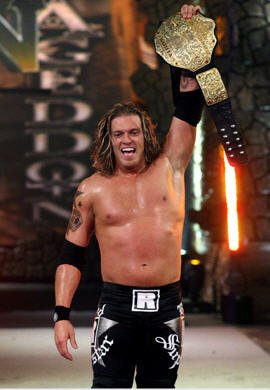 Edge (real name: Adam Copeland) was one of the top-tier professional wrestlers in the WWE. Referred to as either "The Rated R Superstar" (garnering the nickname after the details of his real-life affair with WWE Diva Lita emerged & became part of their on-screen personas) or "The Ultimate Opportunist" (a nickname inspired by his penchant for using any opportunity he can get to screw over his opponents and win titles), Edge gained fame in WWE first as a member of The Brood with Gangrel and Christian. Later on, Edge found superstardom as he teamed with Christian and the team feuded with the Dudley Boyz and the Hardys for the latter half of the Attitude Era in many memorable matches--chiefly Ladder Matches and TLC Matches. Edge would eventually break away from his tag team success and find singles success, then used his victory in the very first Money in the Bank Ladder Match to catapult himself into main eventer status by using the contract to screw over John Cena and win the WWE Championship. From then on, Edge was a main-eventer for the rest of his career--which ended in early April 2011 (following his successful defense of the World Heavyweight Championship at Wrestlemania 27). In a surprise announcement on Raw, Edge revealed that due to his spine deteriorating as a result of neck surgery he underwent years ago, if he did not retire, he risked being paralyzed or killed by continuing to perform in the ring. Rather than fight through the injury and risk his health, Edge chose to retire from in-ring competition--though he promised to be part of WWE in the future, and rumors were running rampant as to a future WWE Hall of Fame induction; they were finally confirmed on January 9, 2012. He was a recurring character on Syfy's Haven, and guest-starred on Sanctuary.

A quick note on how successful he was: during the course of his career, Edge racked up a total of 31 different WWE championship victories, more than any other wrestler in the history of the company - including 13-time world champion Triple H.

This Edge is not to be confused with Edge, a video game, U2 guitarist The Edge, Final Fantasy IV's ninja prince, the knife-loving Delinquent from Rival Schools, or the wielder of the Star Dragon Sword from Suikoden III.

Edge provides examples of the following tropes:
Retrieved from "https://allthetropes.org/w/index.php?title=Edge&oldid=1927587"
Categories:
Cookies help us deliver our services. By using our services, you agree to our use of cookies.