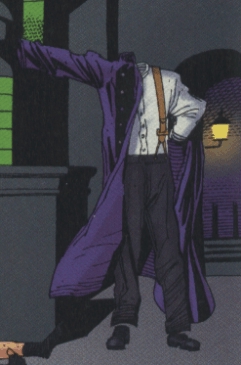 One of the more frequently reused science fiction ideas in TV, after putting people in spaceships, is turning people invisible. In addition to the frequent appearance of invisibility as a one-use trope in both serious and comedic programs (see Invisible Main Character), it has been the central premise for a number of programs.

Invisibility is often coupled with themes of isolation and alienation, as the invisible character's ability marks him an outcast. The original Invisible Man became a sociopath because of his condition. In many of these series, the character is permanently invisible, which strains normal personal ties.

Some coping mechanisms for permanent invisibility:

It is also interesting to note that the overwhelming majority of shows with Invisibility use the same setup: The person is the product of a government experiment, usually military, and becomes an agent for a top secret government anti-crime task force. While this setup is not limited to this power, the fact that the two are so often coincident probably leads to a lot of Recycled Scripts. Expect newly invisible characters to make a point out of realizing that they can't see themselves.

Invisibility is such an old trope that there are multiple ways to be invisible. Many of them still require a Hand Wave.

Implied nudity is another recurring element: Regardless of the invisible character's sex, clothing is seldom affected. Indeed, fans of this trope as a storyline have coined two different terms for invisible women: FFI (or "fading femmes invisible") for women whose clothes go invisible with them, and TFI (or "true femmes invisible") for women whose bodies vanish but whose clothes do not. A third term, CFI ("Clear Femmes Invisible"), for characters such as Oar from The League of Peoples Verse, who are visible but translucent, has also come into usage lately.

It may be interesting to note that whatever the parameters of the invisibility—permanent or non-permanent, affecting clothes or only the body, voluntary or involuntary, these will usually be taken as the "obvious" properties of invisibility, without any need to explain why they should work according to those rules instead of one of the other permutations. (Note for example the opening monologue to the Sci Fi Channel's The Invisible Man, which cites the H.G. Wells story, but implies that character's invisibility was non-permanent and voluntarily controlled.)

Permanent, involuntary invisibility is usually treated as either Cursed with Awesome or Blessed with Suck depending on the story.

Note that most of the works mentioned herein are more "cynical" shows; invisibility as the power of a Superhero, such as Space Ghost, is generally at will and free of angst. It may be a Personality Power, with the user shy and retiring, or sneaky and subversive.

Invisibility is also a recurring device in TV commercials, selling such diverse products as jeans, feminine deodorant and alcoholic beverages.

May or may not become an Invisible Jerkass.

Examples of Invisibility include: