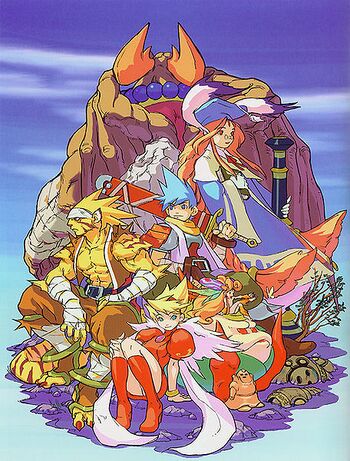 The third game in the long-running Eastern RPG series Breath of Fire, released on the PlayStation in September 1997 in Japan and April 1998 in North America. It was later ported into the PSP system and released in August 2005 in Japan and February 2006 in Europe, with no North American release. As typical for the Breath of Fire series, several characters from the earlier games are reinvented here.

The game takes place in a typical Magic World, except that it has humanoid animals co-existing peacefully with humans. There are also some machines, though their origin is a mystery. A long time ago there also existed a race of dragons, but they were killed off for some forgotten reason; only their fossils remain, turned into crystals which are mined to power machines.

The story begins when a dragon whelp turns up alive in a mine. It escapes and takes the form of a boy named Ryu. The first part of the game is about Ryu trying to survive and find friends; among those he makes are Rei, a goofy thief tigerman; his orphaned sidekick, Teepo; the Rebellious Princess Nina; the ditzy scientist Momo; and the gargoyle-like Garr. The second part has the (now older) Ryu and his friends investigate why the dragons were killed.

The game is mostly remembered for introducing some of the trademark game mechanics on the series, including Ryu's dragon gene system, which allowed the player to mix and match several different "genes" (crystals) in order to create a variety of dragon forms; the Masters, certain NPCs who after fulfilling their requirements granted those under their tutorship stats bonus as well as new techniques; and the Skill system, special master/enemy spells that could be learned and used by any party member. Most of these gameplay elements were later refined in Breath of Fire IV.

Tropes used in Breath of Fire III include:
Retrieved from "https://allthetropes.org/w/index.php?title=Breath_of_Fire_III&oldid=1685548"
Categories:
Cookies help us deliver our services. By using our services, you agree to our use of cookies.