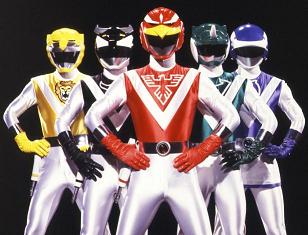 The full team, and yes, the blue one is a girl for the first time.

Three students from Academia Island, an elite school funded by the U.N. for the purpose of researching space flight, are tempted by promises of power from the evil Great Professor Bias. They flee Academia Island, killing two of their classmates in cold blood during their escape.

Two years later they return as officers of an evil organization called Volt. Having changed their bodies, minds and names, they use their new powers to destroy Academia.

In response, three of their former classmates use cutting-edge power suits (originally designed as a new form of space suit) to fight against Volt as Liveman.

Retrieved from "https://allthetropes.org/w/index.php?title=Choujuu_Sentai_Liveman&oldid=1826147"
Categories:
Cookies help us deliver our services. By using our services, you agree to our use of cookies.