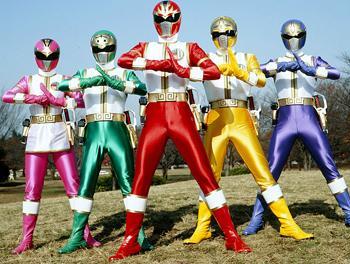 "The Five Stars shining in the heavens!"

Gosei Sentai Dairanger (Five Stars Squadron Dairanger [1]) is the seventeenth installment in the Super Sentai franchise, airing from 1993 to 1994.

6000 years ago, the Gohma tribe and Dai tribe were at war, with five Dai warriors with extremely high Chi levels leading their efforts. Eventually both tribes disappeared, but the Gohma resurfaced in the modern day. Master Kaku, a former member of the Gohma who doesn't wish to see them destroy the world, gathers five youths with high Chi levels to become Dairangers and oppose their schemes.

Its relationship with the American Mighty Morphin Power Rangers series is interesting: the mecha battles were used for most of Season 2; the Kiba Ranger suit was worn by the White Ranger, Tommy's new alter-ego after he lost the Green Ranger powers; Daijinryū became "Serpentera", a warzord used by Lord Zedd; and the Super Chi-Power Bazooka became the Power Cannon. However, the five main Dairanger suits were never used, making them the only post-Zyuranger Sentai team whose suits were never used on Power Rangers (as far as each of the main team is concerned).

And the third party:

You all make me sick.