And Call Him George 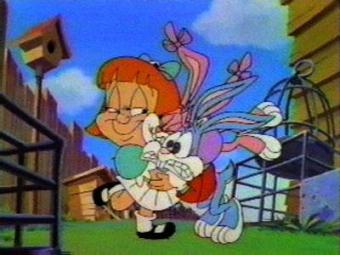 Aww, isn't this little guy cute? I'm gonna take him home and hug him and kiss him and squeeze him with all my heart and be such a great friend and...

...and for some reason he fell asleep. You OK, little guy?

Some monsters don't want to kill people; they just want to love them into iddy biddy pieces. No malice is intended, the monster just Does Not Know His Own Strength—but the "pet" is fully aware of the danger. Usually played for laughs, although there are exceptions. Possibly a deconstruction/satire of the Gentle Giant.

This trope, like Fluffy the Terrible, Grotesque Cute, Enfante Terrible, Killer Rabbit, and Psychopathic Manchild, plays off the conflict between "cute" and "terrifying."

If the monster is a human, this may be the way they tame Fluffy. If not, it is a type of Non-Malicious Monster.

Sadly this is a bit of Truth in Television as children often kill small animals by accident in Real Life. This Trope is not to be be confused with naming conventions of Sleeping Car Porters.

Examples of And Call Him George include: