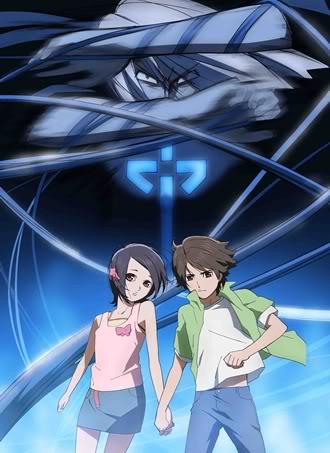 Full name - Noein: To Your Other Self (Mou Hitori no Kimi e)

Haruka is an average girl, living an average life. Or so she thinks. In fact, she is a Cosmic Keystone being sought by the forces of two alternate dimensions, La'Cryma and Shangri'La. Each represents a possible future for Haruka's world, and Haruka has the power to determine which one becomes reality. La'Cryma is a shattered, dystopian place... but there is something sinister about the seemingly serene Shangri La as well. Which side should she choose?

Haruka and her friends find themselves in the middle of a war, with multiple factions and rapidly shifting allegiances. Some wish to protect her, while others will go to any length to abduct her. A few important characters include:

The anime relies heavily on the ideas and theories present in quantum mechanics, most notably the idea that there are an infinite number of parallel universes, with a new one created with every decision we make. At one point, it also references the paradox of Schrodingers Cat. For added fun, watch it with someone who has actually studied quantum physics.