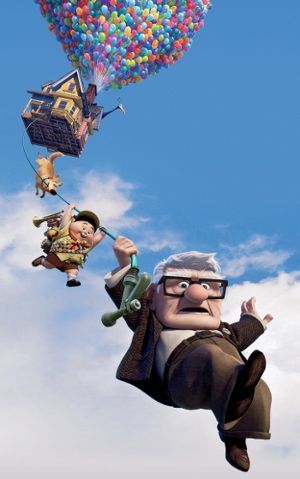 Up is the story of a septuagenarian named Carl Fredricksen (Edward Asner) who had promised his wife, Ellie, that they would one day have an adventure and move to Paradise Falls in Venezuela like their childhood hero, Charles Muntz. However, life got in the way of them doing it -- repeatedly -- and she passed away before they could. Carl, guilt-ridden, shuts himself off from society in the house they built together. When land developers threaten and scheme to destroy their home, Carl decides to take action and fulfill his promise to his wife. Being a retired balloon man, he ties thousands of helium balloons -- the leftovers of his old trade -- to his house and sets off for Paradise Falls. He has an accidental stowaway in the person of Wilderness Explorer Russell, who has been trying to earn his "Assisting the Elderly" badge by helping Carl.

There's more to it than that, of course, but it's hard to give away without spoiling. Suffice to say, traveling thousands of miles in a house lifted by helium balloons is probably the least adventurous thing Carl and Russell do....

Up is Pixar's tenth film and their first full-length 3-D film. It has the honor of being only the second animated film to be nominated for Best Picture at the Oscars, following Beauty and the Beast; it's also the first fully-CGI film to be honored with the nomination. While the film didn't win that award, it did get Pixar another Oscar for Best Animated Feature Film, as well as the Oscar for Best Original Score for composer Michael Giacchino.

If you want to know more-- SQUIRREL!

... Anyhow, for information about the short Partly Cloudy, which played before the film, see Pixar Shorts. For the unrelated Granada/BBC documentary series, see Up.

Tropes used in Up (animation) include:

For most people, it's So Unfunny It's Funny.

Retrieved from "https://allthetropes.org/w/index.php?title=Up_(animation)&oldid=1964145"
Categories:
Cookies help us deliver our services. By using our services, you agree to our use of cookies.