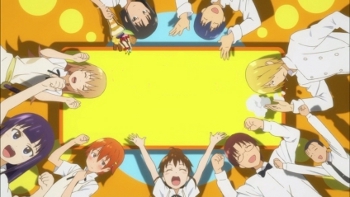 Working!! is a published Yonkoma by Karino Takatsu.

Popura Taneshima is a short girl who works at a family restaurant. One day her boss gives her the ultimatum to go out and find some more help, as no one wishes to apply for the job. After spending an entire day asking, she accidentally bumps into Souta Takanashi, who thinks she's a lost child, and proclaims herself to actually be 17, a year older than he is. Souta ends up taking the job and quickly learns about his new dysfunctional co-workers.

An anime adaptation aired in the spring of 2010. The series has been picked up by NIS America in their anime collection in an English sub-only format under the title Wagnaria!!, with polarizing reactions from the fans regarding to the title change.

A second season was announced, but not before an April Fools' prank making it look like a spinoff show called WORKING!, based on mangaka Karino Takatsu's web version of the manga with a different cast, was getting animated and released on VHS. The actual second season has been licensed and released by NIS America.

A third season aired in 2015, and a web-only season with a different cast was released in 2016.

Not to be confused with Working, the '90s Work Com starring Fred Savage of The Wonder Years fame.

Tropes used in Working!! include:
Retrieved from "https://allthetropes.org/w/index.php?title=Working!!&oldid=1758445"
Categories:
Cookies help us deliver our services. By using our services, you agree to our use of cookies.