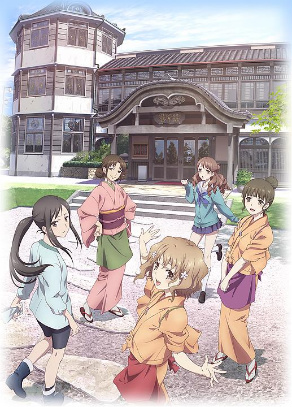 The comedy-drama series follows sixteen-year-old Ohana Matsumae, a mildly happy-go-lucky but pragmatic girl who dreams for drama in her typically normal life of school alongside her best friend Koichi "Ko" Tanemura.

When Ohana arrives home from another day of school, her eccentric mother Satsuki decides to send her to live with her estranged grandmother while Satsuki plans to flee their apartment with her boyfriend after he racks up substantial debt in their name. Ohana tells Ko, who confesses his feelings for her, but their relationship grows awkward when Ohana is too surprised to respond and Ko runs off without telling her goodbye.

Ohana's mood soon brightens only to get quickly get dashed against the rocks when she finds out the hot spring inn—Kissuiso—isn't quite to her fantasy as her unfeeling grandmother Sui Shijima quickly puts her to work, she runs afoul with coworker Minko "Minchi" Tsurugi, and each of Ohana's well-intentioned gestures towards Minko end up with not-so-pleasant results.

Despite this, Ohana tries to not let the circumstances get her down as she works hard in her new environment.

Tropes used in Hanasaku Iroha include:
Retrieved from "https://allthetropes.org/w/index.php?title=Hanasaku_Iroha&oldid=1726936"
Categories:
Cookies help us deliver our services. By using our services, you agree to our use of cookies.