Everything About Fiction You Never Wanted to Know.
(Redirected from Kuroshitsuji (manga))
Jump to navigation Jump to search 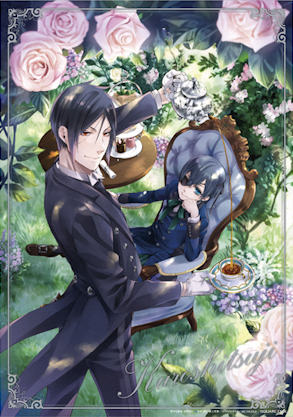 Black Butler (also known as Kuroshitsuji) is a Shounen manga and companion Anime series (although it's pretty obviously looking for a crossover Shoujo audience). Originally created by Toboso Yana.

The Phantomhive family is a respected and distinguished house in Victorian London. Despite a mysterious fire killing off the previous Lord and Lady Phantomhive, their 12-year old son, Ciel Phantomhive, has managed to both build a massive toy and candy company within 3 years, and serve the Queen as a major contributor to England's black-ops.

It really, really helps that Ciel made a literal Deal with the Devil to acquire a super butler: one Sebastian Michaelis, capable of dispatching The Mafia or other threats (including those of the supernatural variety) and then baking the perfect pastry. He has agreed to aid Ciel in all of his endeavors until Ciel "succeeds in all of his tasks". Then Ciel's soul belongs to him.

So Ciel leads a double-life, his service to the Queen combined with his own dark supernatural dealings, and maintaining the peace of the Phantomhive Mansion and its less than serious staff.

Mix and stir Hellsing and Count Cain with Rozen Maiden, at least toward the beginning. No, seriously.

And there is a Japanese live-action movie:

And a video game:

Retrieved from "https://allthetropes.org/w/index.php?title=Black_Butler_(manga)&oldid=1666194"
Categories:
Cookies help us deliver our services. By using our services, you agree to our use of cookies.