Everything About Fiction You Never Wanted to Know.
(Redirected from Nebulous Evil Organization)
Jump to navigation Jump to search 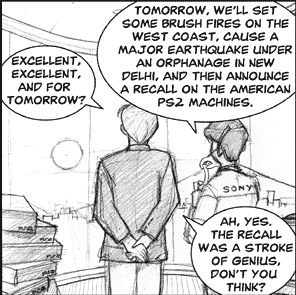 Appearing most often in less realistic spy/action fiction The Nebulous Evil Organisation is the natural enemy of Heroes-R-Us.

Often led by a Diabolical Mastermind, and sometimes developed enough to have its own bureaucracy, It is a vast, deep-pocketed machine with one apparent goal: The proliferation of evil across the globe, maybe with some personal profit on the side.

Like The Syndicate, it has a hand in every conceivable kind of nefarious dealing, from murder to grand robbery to bad traffic. However, its criminal activities have some grand goal, almost always World Domination or The End of the World as We Know It - which is, by sheer coincidence, nebulous enough that nearly any anti-good act can be shoehorned into it. Price-fixing of consumer goods? Fits. Killing political leaders? Fits. Blowing up buildings? Fits. Stealing the gold from Fort Knox? Fits. Attacking the heroes for no stated reason at all? Definitely fits. Expect vast armies of Mooks, a secret underground lair, immense amounts of advanced technology and a clever name.

See also Nebulous Criminal Conspiracy, which the operations extend beyond one single organization.

Examples of Nebulous Evil Organisation include:

Retrieved from "https://allthetropes.org/w/index.php?title=Nebulous_Evil_Organisation&oldid=1639528"
Categories:
Cookies help us deliver our services. By using our services, you agree to our use of cookies.