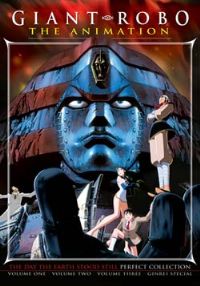 Giant Robo is one of the oldest franchises in Japanese comics. It first appeared as a manga by Mitsuteru Yokoyama that ran for nearly a year from 1967 and 1968. It was adapted into a live-action Toku series that same year, and the show gained a mild cult following in the 1970s when it was aired in the US as Johnny Sokko and His Flying Robot.

But history be damned, when somebody mentions Giant Robo today, they're not thinking of either of those. They're thinking of Giant Robo The Animation: The Day The Earth Stood Still, one of the greatest - or at least the most completely insane - works to come out of the anime industry in the last 20 years.

An (unholy) amalgamation of Wuxia, Superheroes, Richard Wagner, Mecha Anime and pure insanity, Giant Robo: The Day The Earth Stood Still is notable for being an early and rather impressive example of the Massive Multiplayer Crossover, formed when director Yasuhiro ("G Gundam") Imagawa was told that he couldn't use any of the supporting characters from the manga or TV versions of the Giant Robo story. Struck by inspiration, he instead decided to instead take characters from the rest of original creator Mitsuteru Yokoyama's work, including Babel II, Sally the Witch, Romance of the Three Kingdoms, Akakage and many others. To add to the effect he decided to draw them all in Yokoyama's classic 1960s style, along with a retro-futuristic world set in an alternate 1920s populated by Ninja, ancient Chinese warriors, Sharp Suited Businessmen and Badass Longcoats walking side by side.

Oh and don't pay any attention to the synopsis above, or let the art style and Kid Hero fool you into thinking this is a kids' series in the vein of G.I. Joe or M.A.S.K.. Giant Robo's plot starts off slow and deceptively cliché-ridden, with a blatant Mad Scientist and McGuffin driving the first half of the plot, and then we get the Wham! Episode, rewriting the entire premise, beating the snot out of the good guys and resulting in several major characters getting Killed Off for Real. It's not the first, or even the most dramatic.

A new anime, GR: Giant Robo, premiered in 2007 to celebrate the 40th anniversary of the original manga; however, it was not related to the OVA series, and many fans considered it a disappointment.

On the brighter side, Imagawa also scripted a new Giant Robo manga, "The Day The Earth Burned" that started publication in 2006. While this version is also an Alternate Continuity, it does act as a Spiritual Successor to the OVAs, with the same tone and many of the same characters.

See also: Shin Mazinger Shougeki! Z-hen, another great Super Robot series by Yasuhiro Imagawa. Like Giant Robo, it is a revival of a classic series and involves heavy crossover from the original artist's entire body of work.

Tropes used in Giant Robo include:

A series that loves its tropes, twisting them and playing them straight with the same vigor, the Giant Robo OVA features examples of:

And the toku includes examples of...

And the second manga "The Day the Earth Burned" includes examples of...

Retrieved from "https://allthetropes.org/w/index.php?title=Giant_Robo&oldid=1519409"
Categories:
Cookies help us deliver our services. By using our services, you agree to our use of cookies.