Everything About Fiction You Never Wanted to Know.
(Redirected from Tentai Senshi Sunred)
Jump to navigation Jump to search 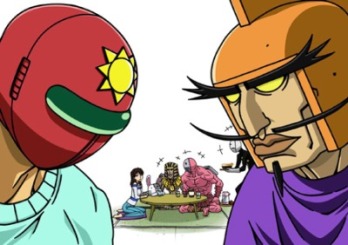 Sunred, a masked hero of justice. Florsheim, an evil organization bent on taking over the city. Legions of monsters ready to fight.

That's how the story would be. Sunred is a bit of a jerk who wears his mask at all times. While mooching off of his girlfriend Kayoko, he deals with Florsheim on a daily basis, just not as you'd expect. He's on (grudgingly) friendly terms with the leader, General Vamp, and helps him move into a new house, clean his place, and occasionally meet to fight as heroes and villains do.

The support cast consists of several monsters from Florsheim and other evil organizations going about their daily lives.

Created by Makoto Kubota in 2005, Astro Fighter Sunred (Tentai Senshi Sunred) runs in Young GanGan, a Seinen magazine. Twenty volumes were published between 2005 and 2014. In 2008 the manga got an Animated Adaptation running for 26 episodes, later in 2009 a second season was made, also with 26 episodes.

Tropes used in Astro Fighter Sunred include:
Retrieved from "https://allthetropes.org/w/index.php?title=Astro_Fighter_Sunred&oldid=1912247"
Categories:
Cookies help us deliver our services. By using our services, you agree to our use of cookies.