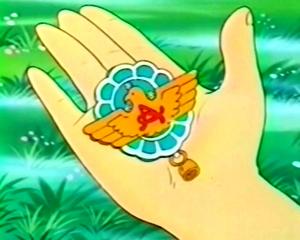 Gift from my prince...

Orphans get a disproportionate amount of attention from the plot of any given story, and is it any wonder why? Orphanhood is a plot gold mine.

Right up there with a propensity to stare wistfully out windows, orphans collect an alarming number of plot-relevant knick-knacks. They will usually be a necklace or locket, and generally be a clue to the orphan's family, though they may have some other plot purpose, but they will always be inherited from the family in question. Mysterious swords and the like are very common. If the trinket saves the orphan's life by blocking an attack, it's also a Pocket Protector. If it wards off evil, it's a Protective Charm.

Why living families are so lacking in portrait lockets and the like may forever remain a mystery.

Examples of Orphan's Plot Trinket include:

Retrieved from "https://allthetropes.org/w/index.php?title=Orphan%27s_Plot_Trinket&oldid=1895956"
Categories:
Cookies help us deliver our services. By using our services, you agree to our use of cookies.