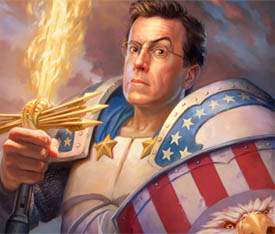 "Nothing is pointless! And the reason is: Because I'm the President of the great United States of America! Yeeeeaaah!"
—President Michael Wilson, Metal Wolf Chaos[1]

How patriotism is portrayed in fictional TV oscillates between two poles. At one pole a patriotic character is portrayed as the quintessential citizen and, likely, soldier. His actions are noble. This is mostly a Forgotten Trope in modern cinema, although it still pops up occasionally (often subverting the ideas of what makes someone patriotic, à la A Few Good Men, or the other attributes associated with patriotism, à la Forrest Gump). At the other pole, the character is a buffoon of some sort—an overly-officious blowhard, or a naif who has never done any thinking of his own, or even just a thug with a popular excuse for his actions. Very rarely, you get a mix, where the blowhard is genuinely loyal and commendable, if not always in a respectable way. This basically becomes the Sliding Scale of Patriotism vs Jingoism.

These poles can and often do reflect the personal political philosophy of the writer (and, contrary to what the stereotypes would have one believe, being right-wing does not necessarily make one more jingoistic, nor does being left-wing necessarily make one less patriotic). We can observe, though, that there are sometimes direct relationships between the popularity of a war and the number of noble or oafish patriots portrayed, which leads to the idea that the trope is Cyclic Trope. The writer may just be putting up a character in response to the mood of the public. Of course, films like Lions For Lambs, which lambast the war they portray and yet were massive flops at the box office, provide a big counterpoint to that theory.

Regardless of the motives, the Super Patriot is often a General Ripper or a Colonel Makepeace.

It should be pointed out that this is far from being mainly an American idea, however, different cultures have different attitudes toward it. For example in British television, or in fact most other British media published after 1918, Patriotic Fervour is pretty much always an unsympathetic trait, usually played for laughs. Where the line is drawn between regular patriotism and fervor is also very different.

See Misplaced Nationalism for the internet equivalent. See My Country, Right or Wrong for when someone allows Patriotic Fervor to convince themselves that aiding an evil leader is their "duty".

Examples of Patriotic Fervor include:

Crocodile: The people's love for the country will be what destroys it.

Gen. Hummel: "The tree of liberty must be refreshed from time to time with the blood of patriots and tyrants." -- Thomas Jefferson.
John Mason: "Patriotism is the virtue of the vicious," according to Oscar Wilde. *Hummel pistol-whips him* Thank you for proving my point.

"Stars and Stripes beats Hammer and Sickle, LOOK IT UP." (Upon dominating the Heavy, a Russian)
"America wins again!" (When dominating the German Medic)
"Your white flag does not stop American bullets." (Dominating the Spy, supposedly French)

Howitzer: I'm an American! AND YOU'RE NOT! SO F***ING DIE!
Narrator: Rated RP for 'Really Patriotic'.

26. Never tell a German soldier that "We kicked your ass in World War 2!"

American Eagle: Good citizens, can you lend a fellow American assistance? I'm in search of Mr. Alloy's classroom. I wish to further my education in science, so that I might contribute to the innovation that makes our country a leader in the quest for knowledge!

Peter (wearing a suit made of an American flag: This is how a patriot dresses.
Stewie: You look like the Statue of Liberty's pimp.