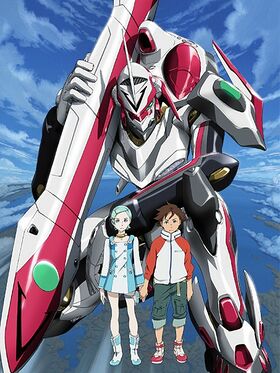 Eureka Seven (AKA Kōkyōshihen Eureka Sebun or Psalms of Planets Eureka seveN) (Pronounced "Eh-oo-wreck-a seven") is a 50-episode sci-fi mecha anime first broadcast in Japan from 2005 to 2006 and produced by acclaimed animation Studio BONES. It was later picked up in the US by Cartoon Network's Adult Swim Block. Right now, every episode is available to watch free and legally to US residents on Crunchyroll both subtitled and dubbed.

The story concerns Renton Thurston, a 14-year old boy leading an uneventful life with his grandfather after losing his father (who was involved in narrowly averting a planetwide catastrophe) and sister (who set out to look for her father, and who Renton regards as a mother figure). His life is changed forever, however, when he meets and falls for Eureka, a mysterious LFO pilot who serves in the Gekkostate, an anti-military group under the guise of a countercultural commune. The rest of the series focuses on Renton and Eureka's growing relationship and involves general themes of love, acceptance, and the tolls of war. It also involves Sky Surfing mecha, superintelligent alien lifeforms, evil master plans, more than a few mind screws, and more musical references than one can count.

Perhaps most notable for being a sci-fi action show in which the hero's romance is at the very core of the story; none of the usual tacked-on romantic subplots or sudden end-of-series couplings here. The often-bumpy evolution of Renton and Eureka's relationship (along with a couple of others) forms the backbone of the entire plot.

Two Video Games and two manga series were later made, the games and one series serving as a prequel focusing on other characters (two of which did a split second cameo in the show) and one manga series set in an Alternate Universe. That one is noticeably darker, with severe damage and death among the main cast, actively malevolent Coralians, and a Downer Ending.

A movie premiered in 2009. (In Japan, the title is Psalm of Planets Eureka Seven: Pocket Full of Rainbows; the American title is Eureka Seven: Good Night, Sleep Tight, Young Lovers.) It's set in an Alternate Universe from the series, but still features most of the main characters. The alternate universe is however implied to be the universe that existed before the beginning of the series.

Oh, and it's pronounced Eh-Oo-Recca, not You-Ree-Kah. It kind of sounds like "Erika", but with an accent (especially if you speak English).

Tropes used in Eureka Seven include:
Retrieved from "https://allthetropes.org/w/index.php?title=Eureka_Seven&oldid=1864322"
Categories:
Cookies help us deliver our services. By using our services, you agree to our use of cookies.