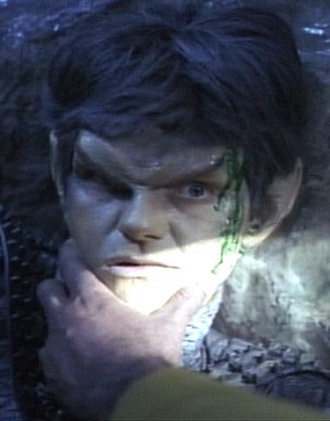 Prick us, do we not bleed?

On the outside, they may be Human Aliens, completely indistinguishable from us Puny Earthlings. Or they can be shapeshifters. Or Rubber Forehead Aliens. Whatever...

What is the best way to quickly establish that a character is not human, sometimes to shock other characters around? Dissection? Squick. They may have Bizarre Alien Biology, but that's usually just an informed characteristic which is rarely appealed to, if ever. Unless it's something very obvious, like having two hearts. Solution? Make them bleed. If their blood is not red, or nonexistent at all, they might as well have the words "NOT HUMAN" written on their forehead.

The trope, of course, is not limited to Human Aliens (Plant Aliens often have green blood, for no apparent reason), but for other types, it doesn't allow for The Reveal in such an effective way.

With Human Aliens, this is a very mild case of You Fail Biology Forever: Since the skin is translucent, a creature with different-colored blood wouldn't have the same skin color as a human...if the skin is white. Darker-skinned aliens, or ones with scales, feathers, hair, or something else hiding their skins avert this problem, albeit probably unintentionally.

Of course, here on Earth, all vertebrates, the largest and most complex members of the animal kingdom, have red blood—the reason? Because all animals breathe oxygen. Red blood cells are red because they contain a protein chemical called hemoglobin, which is bright red in color. This is because hemoglobin contains the elemental metal Iron, which is vital for transporting life sustaining oxygen where it needs to go, and removing waste gases like carbon dioxide. There are other pigments like hemocyanin or chlorocurorin that come in such vibrant shades as pink, orange, blue, and green, but these are much less efficient at transporting oxygen and carbon dioxide than hemoglobin and thus only appear in invertebrates, which have smaller bodies and a better surface-area-to-volume ratio, and thus less need of efficient oxygen transport. Usually hand-waved by having different chemicals in their blood.

In Video Games, Aliens and Monsters often have different colors of blood than red, frequently as an optional mode, to appease the Moral Guardians. Because it's okay to shoot non-human beings if they don't bleed the same way. The North American ESRB's primary line (as far as violent content is concerned) between a T rating (which carries no restrictions) and an M rating (which almost all physical retailers self-imposed an ID check on) is red blood coming out of struck enemies during gameplay. Off-color blood, red blood already outside the body regardless of amount and some amount of dramatic blood in cutscenes remain acceptable in a T rated game.

Assuming it's not red like human blood, Aliens and Monsters most commonly have blood that's either black or some bright color usually associated with something unhealthy, like orange, green, or yellow (blue and violet are possible, but rare). Robots and Cyborgs, on the other hand, are often shown squirting white fluid when damaged (or black, which is arguably oil). The white blood can be traced back to the android in the movie Alien, who was practically overflowing with the stuff and very squishy compared to most robots in film at the time. In a case of reality imitating fiction perflourocarbon based blood substitutes are white and carry oxygen much more efficiently compared to red blood cells.

Not to be confused with Blue Blood, even if it is, in fact, blue. (Though some blue-blooded aliens can, in fact, be Blue Bloods.)

Examples of Alien Blood include:

Retrieved from "https://allthetropes.org/w/index.php?title=Alien_Blood&oldid=1874133"
Categories:
Cookies help us deliver our services. By using our services, you agree to our use of cookies.