Everything About Fiction You Never Wanted to Know.
(Redirected from Tech Marches On)
Jump to navigation Jump to search 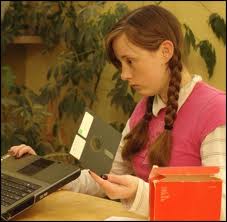 A 21st-century kid trapped in a 20th-century family.

So little Timmy is watching a show from a mere 15 years ago. In one episode, the characters are all excited because of a new computer game that will be released very soon. A computer game—on CD-ROM!

And Timmy says, "'CD-ROMs?" and, depending on his age, may respond with either "How obsolete", "What's a CD-ROM?" or "CDs, DVDs, Blu-Ray, what's the difference anyway? I just call them discs!"

You see, Technology has Marched On, and things like CD-ROMs and VHS cassette tapes and so on have relatively recently become either so little-used as to be obscure, or obsolete altogether. This isn't Zeerust, which is about futuristic tech becoming old rather than about modern tech becoming old. The important qualifications of this trope are as follows:

As far as that last point is concerned, remember that there have been spectacular technological leaps in just the past twenty years—within the lifetimes of many (read: most) Tropers, in fact![1] For the most part, once a technology is invented, it tends to develop at warp speed. Remember, it took only about 65 years (1903-1969) to go from one rickety plane barely able to get off the ground to putting a man on the MOON. So this can lead to some odd moments for those who grew up watching certain things go from "absolutely essential" to "taking up space in your basement".

To clarify, an excellent example would be a scene in Friends where Chandler gleefully describes all the awesome features of his brand-new computer:

"Twelve megabytes of RAM, five hundred megabyte hard drive, with built-in spreadsheet capabilities and a modem that transmits at over 28,000 bps!" [2]

There was a time when these specifications would be mockingly contrasted with a modern counterpart. However, technology has moved on so far and so fast that Chandler's computer is now almost unimaginably primitive; these days, an average cell phone is several times more powerful than that in every way, while fitting in the user's pocket.

Somewhat related are those moments, during not-so-old films, where you realize the entire plot could be resolved with something the world takes for granted today. (Cell Phones, perhaps.) A related and increasingly-common source of humor shows down-on-their-luck characters as only able to afford the kind of older technology found in thrift stores today. Additionally, shows set in the past will often Lampshade Hang this for humor.

A Long Runner might even have its earlier episodes/books/etc. have one level of technology, and later installments have more up-to-date technology with little or no Hand Wave at all.

Often turns a work into an Unintentional Period Piece. Can sometimes be a Trope Breaker: a change in cultural context that affects Tropes. A cousin of sorts to Our Graphics Will Suck in the Future. See Magic Floppy Disk for cases when the tech onscreen in a futuristic series was dated when the show was made.

See also Science Marches On, and some examples of Aluminum Christmas Trees. Long Runner Tech Marches On is when this happens In-Universe. Contrast I Want My Jetpack, where the writers overestimated the advance in technology.

Examples of Technology Marches On include:

Nobody, nobody saw the miniaturization of computers coming (with the possible exception of Richard Feynman—who was such a physics badass that he was talking about the true possibilities of nanotechnology in 1959). Interplanetary travel will surely be easy, but desktop computers? Impossible! Netbooks? Are you on drugs? PDAs and smartphones? Whatever you're smoking, pass it over here. Handheld calculators? Handheld CALCULATORS?

Duncan: "How old is this book?"

"The great room, which had been one of the marvels of the world [...]. No living eye would ever again see that wonderful battery of almost human Hollerith analyzers and five thousand million punched cards holding all that could be recorded on each man, woman and child on the planet."

Nowadays, as in the Friends example above, computer processing speeds and Internet capabilities often fall victim to this:

I-NO: EN 12-82, top of the line mainframe. Capable of 16 bit processing, full monochromatic display support, and a local storage of 128MB! I challenge you to find a more robust system!

Tycho: Alright. The modem works again, and I tucked in thirty-two megs of RAM.
Gabe: Is that... is that good?
Tycho: Let's put it this way. You'll never need to buy a computer again.

Old computer interfaces certainly didn't look like a modern one; computer programs came in the form of punch cards, and they were ugly. It mostly applies to works from before the 90's.

"Check Out Life Before Cell Phones"

The widely-available Cell Phone is a major Trope Breaker, leading to many clumsy explanations for why cell phones don't work in particular circumstances. And far fewer characters get murdered in a phone booth these days, for instance.

The mobile phone is actually Older Than You Think, though, especially in the form of a "car phone." While expensive and limited in many ways, commercially-available car phone technology dates back to the late 1940s, often with radio used to contact an operator, who then would patch the call into the regular phone system. An episode of the 1950s TV series Superman shows editor Perry White using the MTS radiotelephone in his car to call his office. The catch? The original "manual mobile" system only had enough channels for a few dozen mobile calls to be active at any one time, citywide. That became saturated very quickly, rendering this "zeroth generation" of radiotelephones pretty much useless - as one waited years to get a mobile radiotelephone, only to find lengthy waits to make a call as every channel was busy. At that point? It's quicker for Superman to find a Phone Booth handy nearby.

Antique store saleswoman: Now this has an interesting feature - it has a dust jacket. Books used to have these to protect the covers. Of course that was before they had dust repellent paper. And if you're interested in dust, we have a quaint little piece from the 1980s. It's called a Dustbuster."

"Near the window was a large desk stacked with books and notebooks, and in the center of it sat a bulky, greenish-gray device that incorporated a video screen, a keyboard, and a printer. He frowned quizzically at it. What was she doing with a home computer so early? ... 'It's not a computer,' Pamela said. 'Wang 1200 word processor, one of the first. No disk drive, just cassettes, but still beats a typewriter. Want a beer?'"

The Next Big Thing