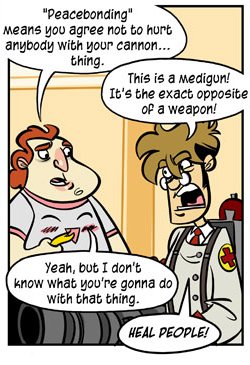 Okay, so you're wounded in battle. No big deal, you can still fight, right? You've got your True Companions to support you. All four of your friends line up in front of you. There's your ally right now. He's drawing his weapon. Wait, why's he pointing it at you? Ow! That traitorous jerk! How could he Back Stab you when you trusted... hey, why do you feel better?

You've just encountered the Healing Shiv. It looks like a weapon, it's used like a weapon, but it's just not a weapon. It's actually a purely healing, defensive, or support implement that happens to be in exactly the shape of a sword, arrow, gun, whatever.

Occasionally, this comes from the target, not the weapon. A certain type of enemy might absorb a certain type of attack into its own HP. This mostly happens to elementally-inclined enemies who absorb their own specialty. The Healing Shiv could also become a normal (or better!) weapon if said target is undead.

Not to be confused with Recovery Attack.

Examples of Healing Shiv include:

Smite thyself with all thy might,
And afterward you'll feel all right.
Smite thy friends and not thy foes
With every hit your HP grows.