Everything About Fiction You Never Wanted to Know.
(Redirected from Shrine Maiden)
Jump to navigation Jump to search 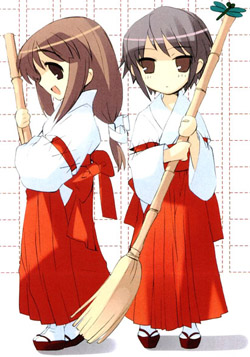 A miko (巫女) is a shrine maiden in the Shinto religion. Given the strength of Shinto in Japan and the position shrine maidens hold in it, it is no surprise that they are a common character type in anime. Straight portrayals and dramatizations are used just as frequently as a priest or nun would be in North American or European media. If a main character, she might be endowed with mystical powers in order to fight demons, hang Ofuda so that she won't have to fight the demons in the first place, receive visions, etc. Otherwise fictional and non-fictional Miko work in shrines, often as an afterschool job.

Miko are more common in H-Games, because they don't have a permanent vow of chastity; they can just take over their temple when the head priest(ess) dies or quits, and then they can do whatever they want. Japanese depictions of most priestesses and other low-rung religious functionaries tend to borrow from miko, including nuns.

Another reason they are common in H-games and Fan Service-laden anime, however, is that they wear uniforms, and like many other seemingly benign and non-sexualized uniforms, the uniform itself can be a form of Fetish Fuel that is easy to get past the radar. Of course, Shinto is a little less strict about sexuality, so it isn't as sacrilegious as sexualized nuns.

Historically, a miko served as an oracle, offering prophecy in the form of a dance. In real life, most modern Miko will help out with shrine functions such as cleaning, perform ceremonial dances based on the historical versions, offer fortunes (omikuji, those little slips of paper that tell you what your luck will be like), and sell souvenirs, sometimes as a part-time job.

(Not to be confused with that Miko. Or that one. And confusing it with any form of Mako is just stretching it.)

Examples of Miko include:

Retrieved from "https://allthetropes.org/w/index.php?title=Miko&oldid=1485372"
Categories:
Cookies help us deliver our services. By using our services, you agree to our use of cookies.