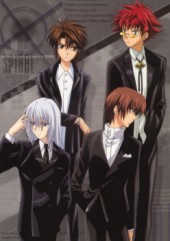 Spiral: The Bonds of Reasoning is the story of this mystery, into which Narumi Ayumu is drawn after an apparently attempted suicide at his school. The girl involved was a member of this mysterious group, a group that Ayumu's older brother, Kiyotaka, was investigating at the time of his disappearance two years earlier. So, against the wishes of Narumi Madoka (Kiyotaka's wife, and current detective), Ayumu begins his own investigation, assisted by the school's lone member of the newspaper club, Yuizaki Hiyono.

At first, Ayumu is simply challenged outright by the Blade Children, who claim to know something of the whereabouts of his older brother. Their "tests" are primarily tests of Ayumu's mental prowess and cunning, but occasionally test his luck as well (the Magic Squares/Bomb puzzle, for instance). As he begins to gain their trust, the mystery of "What are the Blade Children?" is supplanted by "Why are the Hunters trying to kill the Blade Children?" as the Blade Children's ostensible leader, Eyes Rutherford, is targeted by an assassin.

The Blade Children themselves are fairly normal, if prodigies can be called normal, and are physically identifiable as different only by a single rib missing from their ribcage. (They're also depicted with cat-like slit eyes, but that's probably just for the audience's benefit since none of the characters ever comment on this.)

Unfortunately, the anime ends without reaching the answers it set out to find, due to the fact that it caught up with the manga on which it was based. (The fourteenth and final volume of the manga was released in September of 2005, the anime aired between 2002 and 2003.) The final arc of the anime deals with a similar concept as volumes six through eight of the manga, but takes place under different circumstances.

The manga was followed up by the prequel, Spiral: Alive, starring three new characters: Genki Girl Sekiguchi Imari, reluctant serial killer Amanae Yukine, and Sawamura Shirou, a boy who wants to be a detective just like Kiyotaka. Oh, and they're also in a Love Triangle. (Insert Murder the Hypotenuse joke here.) While these three are the central characters, old favorites such as Ryoko, Rio and Kousuke are still central to the plot, and most others have at least made cameos.

Not to be confused with the manga Uzumaki, which means "spiral", or the Ring sequel Rasen, which also means "spiral". While we're at it, don't confuse the two with certain terms from Naruto, or with Spiral Energy. If you're looking for the French police procedural known in English-speaking markets as Spiral, see Engrenages.