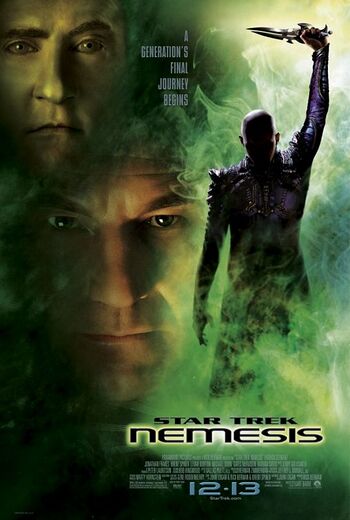 Raise your hand if you're a ridiculous excuse for a villain.

Janeway: Jean-Luc, how would you like a trip to Romulus?
Picard: With or without the rest of the fleet?

The big-screen Grand Finale for the Next Generation crew. In fact, it nearly became a Franchise Killer for the Trek features (requiring a Continuity Reboot to survive).

After a coup, the new leader of the ever-secretive Romulan government makes an offer of peace to The Federation. Our heroes find out that this new leader, Shinzon, is a younger clone of Picard, the by-product of a botched Romulan plot. At first Shinzon's intentions seem honest, but they quickly turn malicious for convoluted medical reasons. There's also a subplot about a prototype of Data, B4, which serves as a counterpoint to Picard's identity struggles.

Director Stuart Baird is an editor by trade; reportedly he had never seen a single episode of Star Trek in his life, and his only other directing credits were Executive Decision and U.S. Marshals. This might explain why Nemesis places more emphasis on Stuff Blowing Up than Character Development, and even includes a Car Chase. The addition of some serious Fridge Logic and Series Continuity Errors turned off the fans, and the revelation that much material had been left on the cutting-room floor - including Cameos from former TNG regulars and True Companions-building moments for the survivors - didn't help. The result was a genuine flop, and the first Star Trek film not to turn a profit.

The failure of this film and Star Trek: Enterprise was a sign that the Star Trek franchise had hit a rut and needed some new blood and fresh ideas, which is what the following film went for.

Shinzon: I'm glad we're together now - our destiny is complete.

Picard: Data, this is something I have to do myself.