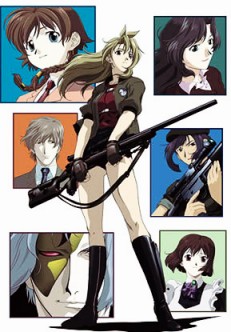 Madlax is the second installment of Bee Train's Girls with Guns trilogy, following Noir and followed by El Cazador de la Bruja. As arguably the most striking innovation in action-adventure anime since Noir, Madlax incorporates many supernatural aspects and concepts associated with psychological thrillers and surrealism, which the audience must often interpret without further explanation. The title is a portmanteau of English words "mad" and "relaxed", playing on the prominent theme of batshit insanity vs. outright catatonia in the story. (It isn't supposed to sound like Mad Max.)

The story revolves around two young women who seemingly have little in common and do not know of the other's existence, at first. The eponymous Madlax is a legend amongst the mercenaries and assassins of the fictional civil war-torn country of Gazth-Sonika. "Madlax" is a code name and a substitute for her real one, forgotten along with the rest of her past before 1999, when the war started. The other protagonist is Margaret Burton, the sole heir of a wealthy aristocratic family in the peaceful European country of Nafrece. Twelve years before the story begins, an airliner her mother and she were on crashed over Gazth-Sonika, and its passengers, as well as Margaret's father who led the rescuers, have been missing ever since. Margaret managed to travel back to Nafrece on her own, though how she made it remains a mystery considering that she too has lost her memories prior to her return; the only thing she recalls is one word: "Madlax". With this thread linking the two girls, they both independently start investigating the powerful crime syndicate Enfant and its Diabolical Mastermind who, for some reason, shows interest in both of them.

Although originally dismissed as yet another Noir rip-off by many a viewer, Madlax was universally praised for its complex yet comprehensible plot (which successfully blends Mind Screwing mysteries, over-the-top Heroic Bloodshed action, and heavy doses of existentialistic symbolism in later episodes), an ingenious soundtrack on par with Noir‍'‍s, and memorable characters. Nevertheless, the initial resentment and the three years between the two series' air dates left Madlax forever in its predecessor's shadow, much to the discontent of a small number of extremely dedicated fans.

The show was licensed by ADV Films in America and Europe.

Tropes used in Madlax include:
Retrieved from "https://allthetropes.org/w/index.php?title=Madlax&oldid=1955254"
Categories:
Cookies help us deliver our services. By using our services, you agree to our use of cookies.