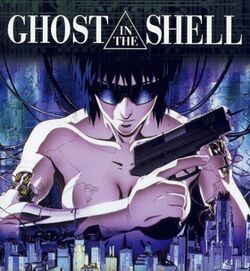 Mamoru Oshii's 1995 animated film adaption of Shirow Masamune's classic manga about a cyborg policewoman in Post Cyber Punk Japan. The film condensed the original manga's plot, focusing entirely on the "Puppet Master" story and making everything much more serious in tone. The film's striking visuals, kickass action sequences, and controversially large amount of philosophical ponderings and Techno Babble pretty much defined western conceptions of Anime -- for better or for worse -- for the better part of a decade.

A sequel, GiTS 2: Innocence, was released in 2004, revolving around Major Kusanagi's team working to solve a rash of murders involving berserk robots while dealing with her absence. This film featured heavy use of integrated CGI and cel animation, and explored the Uncanny Valley even further than the first film.

The first film is cited by the Wachowskis as a direct influence on the Matrix films, so much so that it's practically The Matrix's spiritual predecessor.

Other than being based on the same manga, it's unrelated to the TV series Ghost in the Shell: Stand Alone Complex.

Tropes used in Ghost in the Shell (1995 film) include:

Tropes specific to GITS and GITS 2.0

Tropes common to both movies

"And where does the newborn go from here? The Net is vast and infinite."

Retrieved from "https://allthetropes.org/w/index.php?title=Ghost_in_the_Shell_(1995_film)&oldid=1962300"
Categories:
Cookies help us deliver our services. By using our services, you agree to our use of cookies.