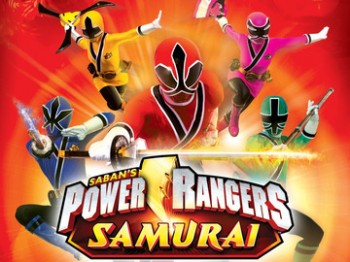 In feudal Japan, Nighloks from the otherworldly Sanzu River emerged from cracks in the human world and terrorized the populace until a group of Samurai united to stop them. When the Nighloks begin appearing again in the present day, five young descendants of those samurai are gathered to train in the ways of their families' "Samurai Symbols of Power" and stop the Nighloks' efforts of using humans' tears of despair to make the Sanzu flood the human world.

The first season produced by Haim Saban after taking the license back from Disney, it's become clear is that Saban is banking on nostalgia for the original Mighty Morphin Power Rangers. They've revived the classic theme song and are referencing it in the morph call, and they've gotten Paul Schrier to reprise his role as Bulk, half of the original series' Those Two Guys. In terms of story, it is sticking very close to that of Samurai Sentai Shinkenger (arguably the closest any Power Rangers season has stuck to its Super Sentai counterpart). Your Mileage May Vary on how good or bad that makes it. Unlike the first half, some episodes of Super Samurai differ greatly from their Shinkenger counterparts -- most notably, the episode "Super Samurai," which has an entirely different story than of the episode it uses footage from. Also, "The Rescue" "He's Not Heavy Metal He's My Brother" and a "Strange Case of the Munchies" and to a lesser extent "Shell Game" and even lesser "Runaway Spike" differ from their Sentai counterparts.

The second half of this series is branded as Power Rangers Super Samurai.

Recurring Power Rangers tropes include:
Tropes used in Power Rangers Samurai include:
Retrieved from "https://allthetropes.org/w/index.php?title=Power_Rangers_Samurai&oldid=1957883"
Categories:
Cookies help us deliver our services. By using our services, you agree to our use of cookies.