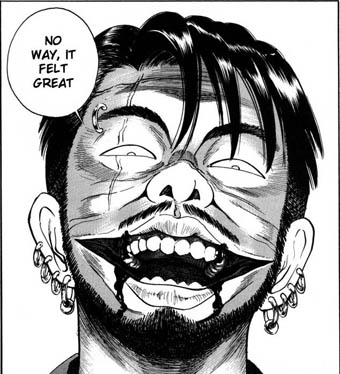 Scared yet? If not, you should be.

Some fight for honor, others glory, and a few just for the thrill of fighting.

Then there are these people.

The Combat Sadomasochist enjoys the pain from combat wounds, both their own and others'. When cut, stabbed or shot, they will moan in ecstasy and lap up the blood. After harming an opponent, and especially when they take a life, the sensation and expression on their face will be orgasmic. Their battle style will usually be intense and dance-like, and they usually eschew efficiently killing enemies in favor of doing so in the most painful way possible. If the Combat Sadomasochist wins the battle and there are enemy survivors they won't receive the Geneva Convention treatment of POWs. If said survivors are languishing or in pain and ask for a merciful (or at least swift) death, they'll dawdle just a bit to make them squirm by sticking fingers in wounds or shooting/stabbing them some more.

They probably evolve from a thrill seeker who gets off on combat adrenaline, but usually also have or develop another fetish along with this. Naturally, these types tend to be Too Kinky to Torture; even if they do feel pain, they're too warped to register it as something bad. Nor do they fear death, since most perceive it as the ultimate rush. However, as extreme hedonists, they can be intimidated with the threat of a long life of bland painlessness.

If a hero has this trait, he's often an Anti-Hero or a Sociopathic Hero who limits his violence to bad guys (or worse guys than them, at least). If a bad guy has this trait (and it's usually a bad guy who has this, as enjoyment of other people's pain in battle is a rather villainous trait), he's usually some kind of Psycho for Hire and often Ax Crazy.

Examples of Combat Sadomasochist include:

Retrieved from "https://allthetropes.org/w/index.php?title=Combat_Sadomasochist&oldid=1664397"
Categories:
Cookies help us deliver our services. By using our services, you agree to our use of cookies.