Drunk on the Dark Side 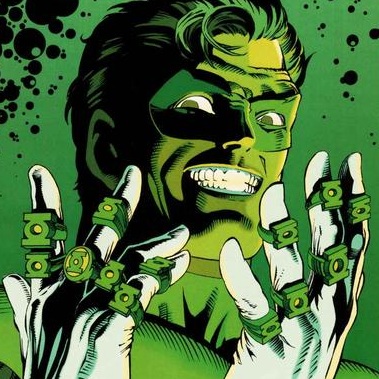 Hal Jordan: Green Lantern and murderer of his entire Corps... and loving it!

Villains aren't ones to preach self control or restraint. They might understand and even use it to good effect, but in their blackest hearts they want to live it up and tear up the scenery... in this trope's case, literally.

A villain who is Drunk with Power on The Dark Side will show how "Evil Feels Good", he has become a God and With Great Power Comes Great Insanity, releasing waves or bolts of dark power, or if they're powerful enough cause a deliberate "controlled" Superpower Meltdown that can become a Sphere of Destruction.

The downside to this exercise in expressive megalomania is its equivalent to (and sometimes paired with) becoming a One-Winged Angel, meaning the villain has completely surrendered to The Corruption and is too far gone for the heroes to be able to save, and thus killing the villain becomes acceptable. Contrast This Is Your Brain on Evil, where the villain's mental processes are equally affected, but not in a fun way. The drug metaphor sometimes breaks down here, as villains will start out experiencing This Is Your Brain on Evil, then proceed to Drunk on the Dark Side when their humanity degrades to the point that they stop fighting it. (With drugs, you normally lead off with the carefree intoxication part, while the soul-crushing addiction part comes later.)

Examples of Drunk on the Dark Side include:

after Miss Post has put on the Glove of Myhnegon and absorbed its power
Faith: What's going on?
Ms. Post: Faith... a word of advice: you're an idiot!
blasts Faith with lightning bolt

"I've tapped into the ultimate power. Observe...! Such magnificent power! You are like insects to me!" -Kefka, Final Fantasy VI

LOOK AT MEEEEEEEE!!! LOOK AT MY BEEEAAAUTIFUL WINGS! I'M COMPLEEEEETE!!!

"I have all the power in the WOOOOOOOOOOOORRRRRLD!!"