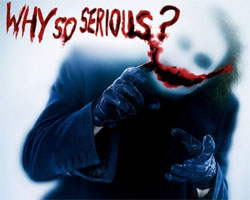 One of the nine alignments from the best-known Character Alignment system. If Chaotic Neutral is the truly free spirit, Chaotic Evil is the truly free evil spirit. Whereas the Chaotic Neutral character is concerned mainly with his own freedom but doesn't seek to hurt others, the same cannot be said for a Chaotic Evil character. They will do whatever they want whenever they want to do it, which, seeing as they are evil, usually entails lots and lots of death and destruction. These characters are usually the most aggressive of the Evil alignments, more often than not being possessed of an impulsively violent nature and a total disregard for people, laws, or even the world around them. In short, Chaotic Evil represents the destruction of not only life and goodness, but also the order upon which they depend.

Chaotic Evil is probably the hardest alignment to depict sensibly. Far too many people assume that Chaotic Evil means a babbling lunatic incapable of walking through a village without inducing wanton, meaningless slaughter and destruction. Chaotic Evil does not mean the most evil or stupid, in it For the Evulz (which can be a motivation to any villain of any Evil alignment), nor even psychotic. A character does not fall under Chaotic Evil solely because they're really evil, stupid, or crazy.

The least dangerous (well, the bottom-rung at least) character of this alignment is the unwilling Mook—they hate their master, they hate taking orders, and they enjoy their job but not the fact that it is a job; they'd have a lot more fun causing all that terror and discord for free, and they only behave mainly out of the fear of punishment. The most dangerous character of this alignment, on the other hand, is undoubtedly The Chessmaster, with his cruel calculation and intelligence and the will to use it in the most horrible ways.

Not to be confused with Exclusively Evil, which is about an entire race falling under any of the Evil Character Alignments.

If you have a difficulty deciding which alignment an Evil-aligned character belongs to, the main difference between Lawful Evil, Neutral Evil and Chaotic Evil is not their devotion to their evil wishes, but what methods they believe are best to realizing it:

Archetypes that are particularly prone to being Chaotic Evil include:

Take note that even if they do enjoy slaughtering people, if characters choose to work for somebody else (especially if they are controlling) they are rarely this alignment: a Chaotic Evil character works with people or uses people, and only works for somebody when forced to. A Psycho for Hire is rarely Chaotic, contrary to popular belief, although do note that not all Chaotic Evil characters are brave, authority-defying villains, and some may even work for others if they can be persuaded to do so. Characters such as the Complete Monster or Big Bad will vary between Lawful Evil, Neutral Evil, and Chaotic Evil; The Dragon is almost never Chaotic Evil, except when they are manipulating the Big Bad for their own purposes or are given no choice in the matter. Occasionally you might find a Chaotic Evil working for a more Lawful (or even good!) character out of personal loyalty because they were childhood friends or partners when they first started out, these relationships are never healthy for either partner however. Normally the Chaotic Evil character will be such a Poisonous Friend that they'll end up on the wrong side of You Have Outlived Your Usefulness, which can be a nice Kick the Dog even if it was perfectly justified.

Expect most characters in a Fantasy setting who want to destroy the world to be this alignment (there may even be some Nietzsche Wannabe mixed in), with a small minority being Neutral Evil for whatever reason. The majority of demons eager to open the gates of hell are Chaotic Evil. The Religion of Evil is more likely to be Chaotic Evil than Neutral Evil, though its counterpart the Corrupt Church is typically Lawful Evil. Chaotic Evil characters can actually rule over people (since they only care about their own freedom), but it typically takes the form of "Do whatever the heck I say NOW!".

Not to be confused with Chaos Is Evil.

No real life examples, please; first, this is a trope about how characters are depicted in media. Real people are far more complex than fictional characters, and cannot be pigeonholed this way. (For that matter, many if not most fictional characters cannot be pigeonholed this way, either; see below for the standards on whether to use this trope at all.) Second, calling real-life people "evil" is an extremely bad idea.

Examples of Chaotic Evil include:

The following might be the best explanation for why Tharizdun wasn't Chaotic Evil in earlier Editions: "CHAOTIC EVIL: The Chaotic Evil creature holds that individual freedom and choice is important, and that other individuals and their freedoms are unimportant if they cannot be held by the individuals through their own strength and merit. Thus, law and order rends to promote not individuals but groups, and groups suppress individual volition and success." - 1st. Editon DMG Basically Chaos as individualism and Evil as brutality and cruelty.

Retrieved from "https://allthetropes.org/w/index.php?title=Chaotic_Evil&oldid=1927537"
Categories:
Cookies help us deliver our services. By using our services, you agree to our use of cookies.