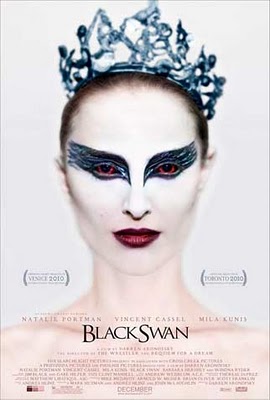 After years of working in the background, Ballet dancer Nina Sayers (Natalie Portman) has the chance to become the star of her troupe in a production of Swan Lake. But competition emerges in Lily (Mila Kunis), who is charming the director Thomas Leroy (Vincent Cassel). Soon, things start getting weird.

Can essentially be described as a live-action Perfect Blue (or a live-action Princess Tutu, for that matter), and is every bit as good (and disturbing) as that implies.

Black Swan was well-received by critics, and became Aronofsky's highest-grossing movie. Natalie Portman's performance was especially praised, and she received an Academy Award for Best Actress among many other awards and nominations.

Not to be confused with the 1940s Tyrone Power film The Black Swan, Cygnus atratus, Nassim Nicholas Taleb's guide to randomness, Mercedes Lackey's book The Black Swan, the song from Thom Yorke's solo album The Eraser, or the Australian brand of dip.

Tropes used in Black Swan include:
Retrieved from "https://allthetropes.org/w/index.php?title=Black_Swan&oldid=1631825"
Categories: