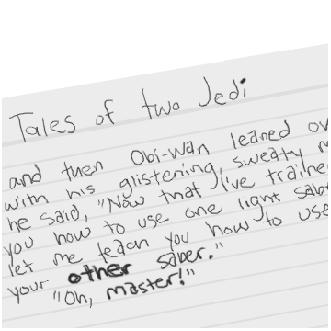 Page one of three thousand.

AND THEN THEY ALL FUCKED
— Yelling Bird of Questionable Content

A Lemon is a Fanfic with explicit sexual content. This can range from plot-what-plot boinkfests with no justification or explanations to exquisitely plotted and crafted stories that just happen to follow their participants into the bedroom (and through the subsequent action therein) on a regular basis. Once a common term, it's now less frequently seen, though by no means extinct.

Can be used as a noun and an adjective interchangeably: "It's a lemon story" and "it's a lemon" are functionally equivalent. Surprisingly, the term is not automatically synonymous with "bad" (although that, as the saying goes, is often the way to bet).

While the complementary term Lime still has some usage, there was actually at one time an entire "Citrus Scale" with various fruit code names such as Grapefruit.

The trope has nothing to do with the Lemony Narrator, although combining the two would be quite interesting, especially if it were in a Fanfic featuring 30 Rock's Liz Lemon. Possibly shipped with Cure Lemonade.

Not to be confused with those tasty, tasty fruits, the slang term for a lousy car, the Russian term for a million dollars (or a hand grenade). Has nothing to do with burning your house down.

No examples, please; we'd be here all day. But feel free to list this as a trope on appropriate Works pages.