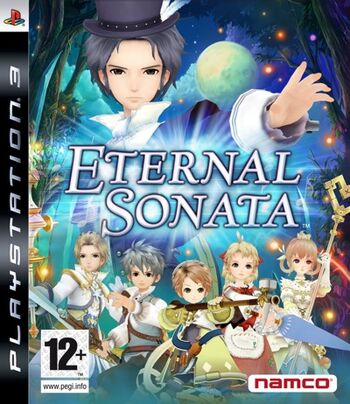 It's a Japanese RPG. Cel-shaded, manga-style graphics. Heroes who prefer swords, The Empire trying to create an army of super-soldiers with Psycho Serum. A young girl, shunned by society, who just wants to help people. A young, handsome thief who wants to make the world a better place, so that no one has to steal to survive. A prince, a princess, and La Résistance round out the cast. A Bishonen with a BFS, and two girls with impossible hair-colors and Stripperiffic outfits. Battle between light and darkness, yadda yadda yadda...

Oh, I forgot to mention that the main character is Frédéric François Chopin, famous pianist and composer, known as 'The Poet of the Piano', a legend in his own time. He died in 1849, at the age of 39, in his sister's apartment in Paris... and the game takes the form of his dying dreams, as the major events of his life are spun into a fantastic tale, and as the life slowly seeps from him, the border between dream and reality grow thinner...

The battle system reflects recent influences in RPG design. Your character is given a set interval of time with which to move or attack, and the special moves available to your character depend on whether they're standing in light or shadow. Some environments have moving clouds and the like, making it a challenge to keep in a location where your heals can go off. It is possible to block, counter and build up a chain called the Harmony Gauge in order to boost the power of your special attacks.

The straightforward RPG gameplay is accompanied by both original and arranged pieces by the virtuoso composer, and the action is occasionally interspersed with sequences that relates the events to the very real drama of the historic Chopin. An encounter with an unbeatable swordsman in a rain-soaked jungle reflects Chopin's near-fatal bout of tuberculosis on Mallorca during the rainy season. Escaping from the castle dungeons with the aid of La Résistance parallels Chopin leaving his native Poland mere days before the November Uprising throws the country into chaos, and so forth...

Eternal Sonata has been praised for its strictly traditional story and gameplay, and criticized for the same. The game was first released for the Xbox 360 in 2007, then for the Play Station 3 (with added features and a somewhat altered plot) in 2008.

There is also a manga adaptation of the game. However, it is only 10 chapters long and changes many aspects of the story drastically.

Tropes used in Eternal Sonata include:

Rondo: You fool. The information you provided us was very valuable. But I was ordered to kill you if your identity was revealed. Don't take it personally.

Allegretto: (regarding Polka) Sacrifice her life?! There's no way I'd let her do something like that!
Solfege: I don't wish to lose her, either. But I don't think we can fight fate.
Allegretto: (makes a slashing motion with his arm to indicate he doesn't hold with that) Who cares about fate anyway?!

Polka: There's no way I'll go with you. Besides, I already know what it is I have to do. I know what to do to really help everyone.
Count Waltz: You people don't quite understand the situation. Do you honestly think you have any say in the matter? How unfortunate. And just as I was going to respond to Prince Crescendo's little bid for peaceful negotiations. You will hand the girl over to me immediately. Because I'm afraid that if you don't, you're dead.

"Terrible? Why, whatever do you mean? It was entirely for the sake of my subjects that I developed the most effective medicine possible."