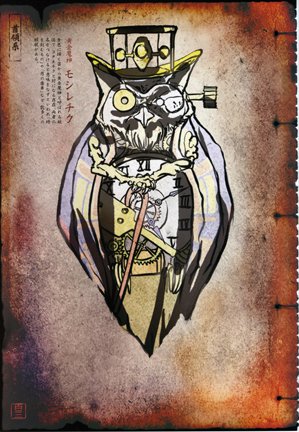 Check your nightmares at the door.

The Owls Are Not What They Seem
—Twin Peaks

Owls are, to put it bluntly, creepy. They just are. Perhaps it's because most of them are nocturnal or that they eat cute little mice or that they can spin their heads all the way around. It could be those (relatively) gigantic, piercing eyes. Or perhaps it's the sounds they make at night (except for the beating of their wings which are so soft and fluffy you'll never hear a thing. Bad news for rodents), in the dark, when you're in The Lost Woods.

It doesn't really matter why they are creepy, they just are. Owls have long been viewed as harbingers of disease, death, destruction, and bad luck. To the Hopi, they were a symbol of evil sorcery; to the Romans, they were funerary birds, signaling ill will in the daytime (unless you were collecting their eggs, in which case they signaled a Hideous Hangover Cure); and the Aztec god of death, Mictlantecuhtli, was often portrayed with owls. Geoffrey Chaucer also had a thing for them.

So remember: if you ever see an owl, clutch your Tootsie Roll Pops tightly and run in the other direction.

Owls are, of course, also assholes.

On the other hand, owl was a symbol of Athena, Greek goddess of wisdom, and generally one of the most human-friendly of the Olympians. Thus as long as it's not just there to scare you, the owl can be a symbol of wisdom. This of course may lead to the softer version of the trope that owls tend to be pompously intellectual and annoying.

To many, owls seem like cats as birds. Whether this makes them better or worse is up to you.

Also, everyone is fond of owls, as the hit count and comments on Lovely Owl Molla demonstrate. Possibly because an owl's face superficially resembles a human face, with the beak where a human nose would be. How this is relevant, God only knows.

See also Feathered Fiend for other types of creepy, creepy birds. Contrast The Owl-Knowing One.

Examples of Owl Be Damned include:

You could dress up a pigeon in a tiny suit of evening clothes and put a tiny silk hat on his head and a tiny gold-headed cane under his wing and send him walking into my room at night. It would make no impression on me. I would not shout, "Good God Almighty, the birds are in charge!" But you could send an owl into my room, dressed only in the feathers it was born with, and no monkey business, and I would pull the covers over my head and scream.

she falls into this mediaeval vein of description (the italics are ours): "The banner unfurled it at the sound, and shook its guardian wing above, while the startled owl flapped her in the ivy; the firmament looking down through her 'argus eyes,'-

Night closed in. The Limberlost stirred gently, then shook herself, growled, and awoke around him.
There seemed to be a great owl hooting from every hollow tree, and a little one screeching from every knothole.

Sly Cooper, you have escaped my gas chamber and destroyed my death ray. Remarkable, you Coopers always find a way to beat me.