Everything About Fiction You Never Wanted to Know.
(Redirected from Transformers Film Series)
Jump to navigation Jump to search

Note: This is about the live-action Transformers films. For the 1986 animated Generation One movie, see Transformers: The Movie.

The first in a series of live-action films, based on the long-running Transformers toyline and television series. So far each produced by Steven Spielberg and directed by Michael Bay. The third film was released in June 2011 and ended up involving almost all the same people except writers Roberto Orci and Alex Kurtzman, who have gone on to other projects, and a few of the actors like Megan Fox.

Our protagonist is teenager Sam Witwicky (Shia LaBeouf). He wants his first car to impress "evil jock concubine" Mikaela (Megan Fox), who turns out to be rather talented with cars. He ends up getting a beat-up yellow Camaro. But it turns out the car chose him; it's one of many sentient alien robots who can "transform" and disguise themselves as human vehicles. His name's Bumblebee, and he's an advance scout for the Autobots, whose mission is to protect Sam from the Decepticons, who want Sam's family heirloom that holds answers to the location of the AllSpark, a powerful artifact responsible for the Transformers' existence and lost for thousands of years. The two factions battle over it: the Autobots want to return life to their dying world, while the Decepticons seek to exterminate their enemies.

This film received mixed professional reviews, leaning slightly towards the positive side. Transfans were broken, either loving seeing live-action Optimus Prime or complaining about what they believe to be a poorly written plot (although among the complainers, those who complained about the movie for Fan Dumb reasons appear to have been more vocal). Its success is undisputed (the biggest non-sequel of 2007); the profits from the toyline alone made Transformers the top-selling boys' toy in America, unseating Power Rangers for the first time since that show's inception. It was nominated for Oscars in Sound Editing, Sound Mixing and Visual Effects.

Reportedly, Michael Bay has recently signed on to direct a fourth installment in the film franchise, slated for 2014. It has been described as somewhat of a Continuity Reboot, but still follows on from the storyline established by the other films.

The following tropes are common to many or all entries in the Transformers (film) franchise.
For tropes specific to individual installments, visit their respective work pages.

Tropes in the first film 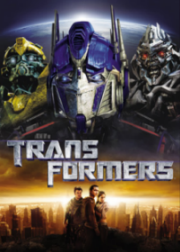 Tropes for works connected to the films

Retrieved from "https://allthetropes.org/w/index.php?title=Transformers_(film)&oldid=1861764"
Categories:
Cookies help us deliver our services. By using our services, you agree to our use of cookies.