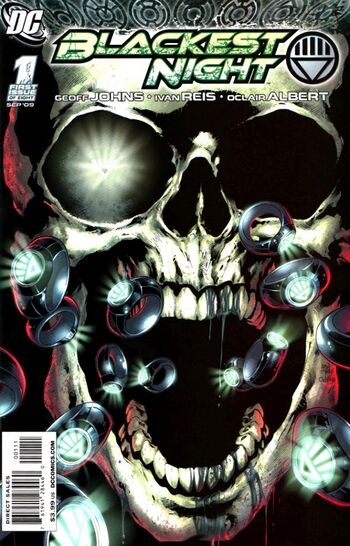 The Dead Shall Rise

Blackest Night All The Tropes Page of Earth-Prime. RISE.

Now that we have your attention...

Blackest Night is the big Crisis Crossover event for the DC Universe in 2009, written by Geoff Johns, intended to take a serious look at death in comics. It's a gigantic Zombie Apocalypse featuring superheroes and supervillains being forced to fight against their loved ones risen from the grave. This involves plenty of Nightmare Fuel and crowning moments of awesome for everybody involved. The whole series is a detailed examination on what the Comic Book Death actually means for the character involved, mixed with a nonstop intense thrill ride of action and kickass personal battles, fueled by a cosmic terror.

Largely focusing on the Green Lantern mythos, the villain is an Eldritch Abomination named Nekron who represents the forces of death on a cosmic level, and wishes to consume all positive and negative life force in the universe. To take it, he needs to draw everyone into his realm... effectively making him an Omnicidal Maniac.

It's also the latest chapter of Geoff Johns' cycle of epic Green Lantern stories (the others being Green Lantern: Rebirth and the Sinestro Corps War, followed up by Brightest Day) Along with having major impact on the Lanterns, it's used the concept of the dead rising to force many heroes to confront their dearly departed in unexpected ways, leading to some surprisingly emotional stories for a crossover.

Following the events of Blackest Night is Brightest Day, which will not only further chronicle Johns' Green Lantern work, but deal with the repercussions of the post-Blackest Night DCU.

Tropes used in Blackest Night include:
Retrieved from "https://allthetropes.org/w/index.php?title=Blackest_Night&oldid=1780061"
Categories: