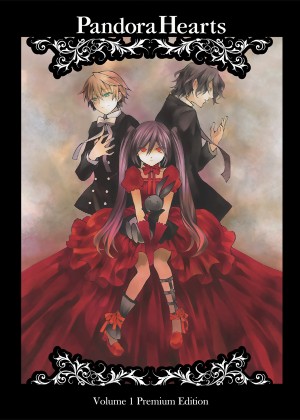 Oz Vessalius is a young boy with father issues who is about to come of age and be recognized as the heir to his family.

But during his coming of age ceremony, Oz is attacked by the mysterious Baskervilles and is sent to the Abyss for the crime of 'existing.' There he meets an amnesiac being named Alice/B-Rabbit - a monster called a 'chain' who cannot leave the Abyss without making a contract with a human. Together, Oz and Alice make it out of the Abyss only to be met in the real world by three agents of Pandora who inform Oz that he has been missing for ten years instead of just a single day.

Now a part of Pandora, Oz works with them to find illegal contractors, recover Alice's lost memories, and to unravel the mystery of who the Baskervilles are and why they sent him to the Abyss.

Pandora Hearts is a manga by Mochizuki Jun, sponsored by Square Enix. It was made into an anime series airing in 2009. Yen Press is publishing the English language version of the manga for North America, and NIS America has announced their intent to localize the anime in a bid for new ground.

Tropes used in Pandora Hearts include:
Retrieved from "https://allthetropes.org/w/index.php?title=Pandora_Hearts&oldid=1675239"
Categories: