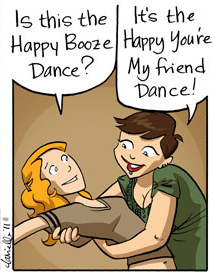 Girls with Slingshots is a Mundane Fantastic webcomic by Danielle Corsetto about the lives of Hazel and Jamie, their talking cacti, and their friends. The strip takes a lot of its humor from switching the standard gender arrangement of common sex comedy tropes.

The name appears to come from a rather strong drink.

Tropes used in Girls with Slingshots include:

Hazel: I'm a high-functioning drunk, Clarice. You know that.
Clarice: Yeah, but I've been counting bottles and you've crossed your faux-sober threshold.
Hazel: Eight? Holy shit, I leveled up!

Maureen: Jamie, your breasts are...legendary.
Jamie: You can say it twice. I consider them each a separate legend.

Hazel: Cats only have two emotions - "feed me" and "fuck you."

Hazel: ... But I asked twenty people the first word they thought of when they think of you, and all of them said "boobs". Even Your Mom, who added that the second word she thinks of is "boobs".

"Everything tastes better with an umbrella."