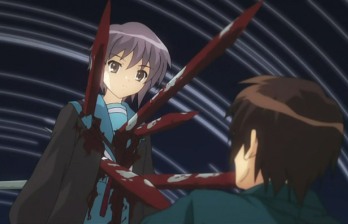 Audrey: So you can't feel anything?
Nathan: That's right.
Audrey: What about cold? Can you feel cold?
Nathan: Oddly enough, yes, I can feel cold.
Audrey: Really?

Exactly What It Says on the Tin. In normal living things, pain functions as a warning system for the body that tells it to try and get away from whatever is causing the sensation. However, sometimes someone can't feel pain for whatever reason, usually due to nerve damage or other factors. Fiction likes to explore this idea and will often explore the consequences in a very philosophical way.

For humor purposes, a man may sometimes gain a temporary version when Distracted by the Sexy.

As in Real Life, a person like this is very likely to accidentally injure themselves and not realize it for some time. In fiction these people also tend to develop a skewed perception of reality, and may take to killing people for fun. Other times they're simply shown as tragic individuals who are literally out of touch with the rest of us. This is also a common feature for Super Soldiers, especially disposable ones. In such cases, the massive crippling drawbacks of not feeling pain tend to be downplayed.

See also Made of Iron and Nigh Invulnerable for when a person takes no actual damage, but may still feel something. This trope may result in a Major Injury Underreaction.

Examples of Feel No Pain include: