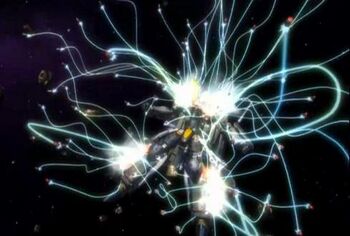 See it in motion here.

Said of missiles or beam weapons that fire along trajectories that are at an unlikely angle off of their target, streak along for a fair distance, and then make sudden synchronized turns in order to actually bring themselves to bear and hit it. The individual missiles of a Macross Missile Massacre almost always robotech on their way to a target. Often, it seems the best (or only) way to avoid this or a Macross Missile Massacre is to perform a High-Speed Missile Dodge.

Named for the "adaptation" of several Anime known as Robotech, in which the behavior was first seen in the West. Has nothing to do with the method in which said series was created.

Finally, with an explosion that sent the D.D. rocking violently backwards, the lasers vomited two blinding beams of crimson light, surrounded by swirls of blue energy and roared down the passageway the D.D. had been facing. Sylvie was slammed painfully into her seat straps by the blast, generating a startled cry from the sexaroid.
Faster than the eye could track, the twin beams of destruction sliced down the hallway. Blue energy mixed with crimson light, becoming a hybrid purple lance that turned at a junction. Then they went up a stairway, burned through a sealed door, crossed a spacious room, burned through the opposite door, and continued down another hallway. Finally, the beams stopped and lanced straight down through the floor in two different places.
They hit the Boomers guarding Priss on the top of the head, and continued down into the Boomers' bodies until exiting where their 'groins' were. The vaporized portions of the androids, having become plasma, burst outwards and destroyed the rest of the machines. A shocked Priss was not injured by the minor explosions of her captors' destruction.